Senior student Costantino Albini’s testimonial at the ceremony at the Great Stupa in Merigar on October 3, 2018, to say farewell to and honor Master Namkhai Norbu 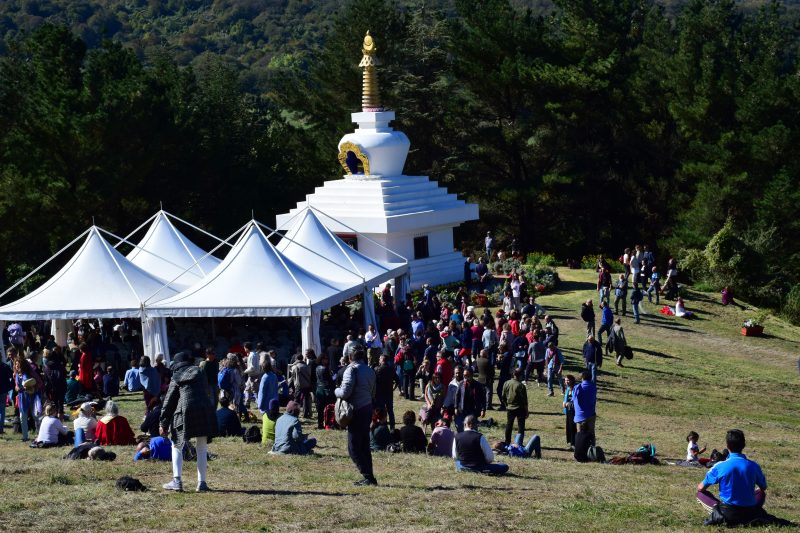 Dear Sisters, dear Brothers, dear Friends – also you who represent the institutions, today I will call you all only in this way: Friends.
On behalf of the entire Dzogchen Community and of the Namkhai family, I greet you and thank you for having come today, October 3rd 2018, to honor and to remember Chögyal Namkhai Norbu, an extraordinary man who has meant so much to those who have had the fortune and the privilege of knowing him, and who has brought about, to a lesser or greater extent, profound changes in our lives.
His birth name is Namkhai Norbu, which means in Tibetan “Jewel of the Sky”. For his colleagues at the Oriental University Institute of Naples he was professor Norbu.
For the Tibetan world, in which he is not only a cultural figure but also and above all a spiritual one, he carries the title of Chögyal, King of Dharma, that is, of the Teaching of the Buddha.
For us, his students, he was and forever will be, affectionately, Rinpoche: Precious Teacher.
It is not easy to talk comprehensively in a few minutes of the life of Chögyal Namkhai Norbu, a man of inexhaustible versatility and of a sagacious and multifaceted intellect, which I would call brilliant. His innumerable cultural, moral, and spiritual dimensions cannot be compared even to the sparkling and surprising facets of a diamond.
If today I were to attempt to talk about all the good that he has done, of all that he has given us and the world, the whole day would not suffice and I would certainly finish by omitting far more than I could succeed in mentioning. 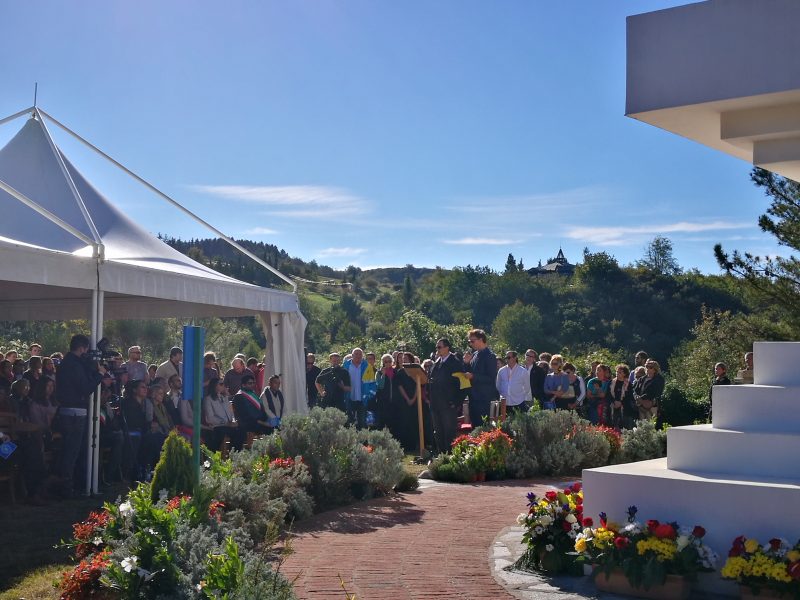 I will limit myself to listing some aspects of his work on the cultural level: numberless publications document his continuous historical and archaeological research, particularly in archaic Tibet and in the ancient and forgotten kingdom of Shang Shung.
His findings revolutionized ideas long held as certain by the scholarly Tibetological establishment.
As Professor of Tibetan and Mongolian Language and Literature at the University in Naples, he created, among other things, a system of Tibetan language transliteration that allowed his students to pronounce the Tibetan language perfectly.
An expert as well of Traditional Medicine and Tibetan Astrology, Chögyal Namkhai Norbu founded in 1991 here in Merigar, in the presence of His Holiness the Dalai Lama, the Shang Shung Tibetan Institute of Studies, to further knowledge of these disciplines and of Tibetan culture in general.
In recent years the Professor has also catalogued, translated, and published more than three hundred folk ballads and Tibetan songs, reworking and encouraging the study of the choreography of the dances associated with them.
But the love and passion of Chögyal Namkhai Norbu for the history and culture of his land were not limited to its remote past. Now I want to illustrate some aspects of the high morality of the life of Chögyal Namkhai Norbu.
Recognized at birth as a Tulku or living Buddha, that is, a reincarnation of a great Master of the past, Chögyal Namkhai Norbu never availed himself of his status for his own political, economic, or religious advancement, as was often customary among his contemporary peers. Throughout the course of his life his successes, his every conquest was attained solely through his tireless work and his, yes, superior skills.
For those who knew him and were close to him, during his whole life he manifested the qualities of an enlightened being whom we call a Bodhisattva, that is, an incarnation of supreme generosity, loving kindness and compassion.
In 1988 Chögyal Namkhai Norbu founded ASIA (Association for Solidarity in Asia), a non-governmental organization that to this day carries out projects of cooperation and solidarity in Tibet and other disadvantaged regions of the planet.
ASIA brings humanitarian aid to the regions struck by natural disasters, builds schools and hospitals, and facilitates the professional training of people in need.
However Chögyal Namkhai Norbu was not only a great scholar, an audaciousresearcher and explorer, and a highly moral, generous and compassionate man, always ready to help people and populations in difficulty.
The most extraordinary and important trait of Chögyal Namkhai Norbu is certainly his exceedingly elevated spirituality. Custodian and practitioner of the ancient knowledge called the Dzogchen Teaching that is at the root of Buddhist spirituality, for us Chögyal Namhai Norbu is above and beyond all, our beloved Master, a Master of life who taught us to become complete human beings, the Sacred Master of the Vajra who introduced us to the deepest knowledge of ourselves, revealing to us our true nature.
For more than forty years during which he has poured an ocean of marvelous and profound teachings into us, he has known how to speak to each one of us personally, intimately, answering our yet unexpressed questions. 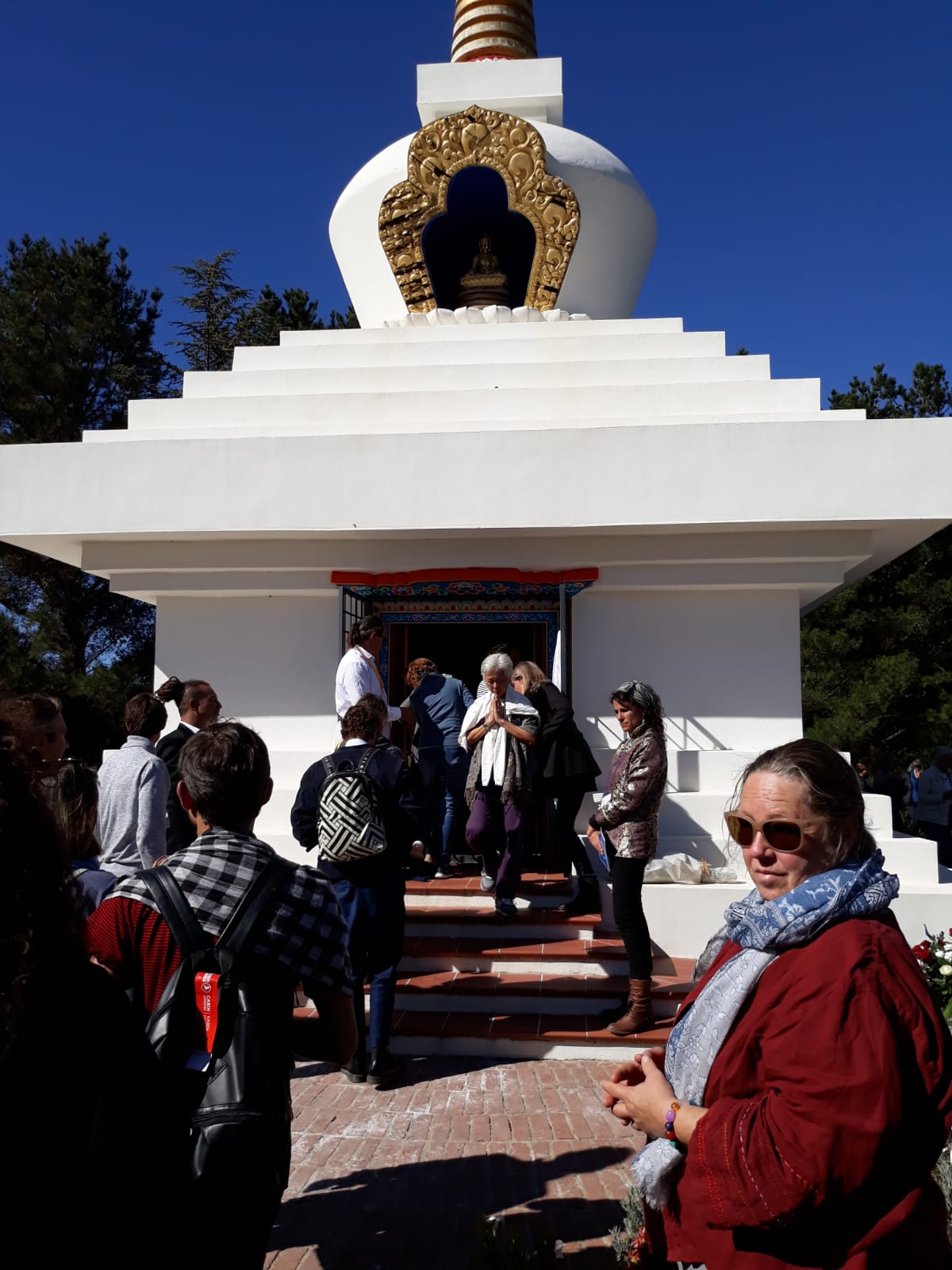 Chögyal Namhai Norbu is an example of immense wisdom, kindness, lucidity and indomitable free spirit.
His vision is that of a trailblazer: from the beginning he has always taught us clearly that the path of inner evolution is a path of personal responsibility.
At the conclusion of the first retreat of Dzogchen teachings, at Subiaco in the summer of 1976, he explained his vision for our future:
“We will not only make a Buddhist center,” he said, “but rather, we will form a community of practitioners… Every Dzogchen practitioner is a living center of knowledge of the Teaching, a free, relaxed person, independent of titles and schools… A community of practitioners can extend anywhere, even across the earth. Every practitioner wherever he goes will find his family, his brothers and sisters who, sharing his same knowledge, will welcome him and support him in his practice.”
Now, Master, we, your students, are thousands and are all over the earth. Today there are many of us and we are here to pay homage to you but this is not a farewell, it is not a goodbye.
You, Master, live in the heart of each one of us. Thanks to your compassion we are now your Body that continues to live.
Let us continue the journey together, to bring your vision to fulfillment.
We will carry your projects, your ideas, your endeavors forward and we will evolve in every corner of the planet.
We will be with you again and again, for many lives to come, until Supreme Realization.
This is your promise.
This is and will be our life.
Master, Rinpoche, thank you.