Some people who followed the Mandarava Drubchen retreat in webcast are curious about the string, wound around a box, they saw being handed to Rinpoche during the practice. There are two very long threads of five colors twisted together. I don’t know if they are the same ones Rinpoche made for the empowerment of the chüdlen elixir he made in Merigar in the early ‘90s. Both strings were passed around the statue of Mandarava on the altar behind Rinpoche and then around the collection of chüdlen pills wrapped in brocade. One passed along the top of the tent and then overhead down into the place of non-interrupted mantra recitation, around the practitioners taking turns to keep the mantra going, and back to the chüdlen pills. Martin from Slovakia unwound the other one at the beginning of the singing of the main mantras, and skillfully passed it around behind all the people practicing in the Gönpa, finally handing it to Rinpoche. He then rewound it after the sogthig breathing and replaced it on the chüdlen pills. Thus they were empowered by millions of mantra recitation. 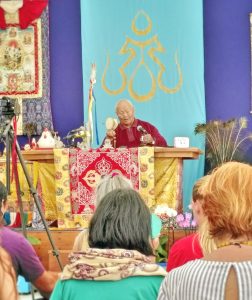 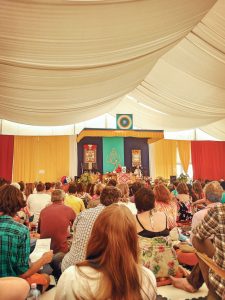 Although many people used their available financial resources to attend the Yangtig retreat at the end of last year, and also many find it impossible to come because of rising prices and falling income, almost as many people were physically present as last year: 760 participants.

Drubchen means vast accomplishment. It is a form of intensive group practice. It is said that several days participating in a drubchen can yield the same results as years of solitary retreat.

Dzongsar Khyentse Rinpoche says: “If there’s any drubchen happening, one must try to participate. Just as we should participate in tsok offerings again and again, it is really good to participate in a drubchen as a Vajrayana practitioner again and again. It is believed that just going to one drubchen will take care of all samaya breakages instantly. Where there is no drubchen, one should try to organize one.”

Our Mandarava Drubchen retreat seems to have become an annual event, starting at Losar and ending at full moon. This time Rinpoche gave very few explanations and personally led long practice sessions twice a day. He gave the lung of the whole terma twice as well as the lung of the relevant tsalung terma. He also gave the initiation. What a downpour of blessings! E Ma Ho!