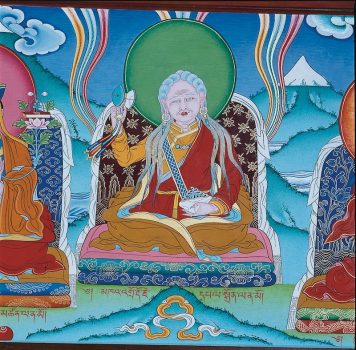 Ayu Khandro Dorje Paldrön (1839-1953) was born into a wealthy family in the village of Dzongsa in Kham. Attracted to the life of a practitioner, when still a child she went to live with her aunt, a yogini, in a cave close to that of Togden Rangrig, a local master who gave her the name Dechen Khandro. There Ayu Khandro learned how to read and write and when she was fourteen attended a consecration performed by the three great Rimé masters of that time, Jamyang Khyentse Wangpo, Jamgön Kongtrul, and Chogyur Lingpa, receiving many teachings. Later she began the preliminary practices of the Longchen Nyingthig  and received the initiation of the Pema Nyingthig  from Jamyang Khyentse Wangpo.

At the age of nineteen, her parents took her from her aunt, forcing her to marry a wealthy man who showed himself kind to her, but Ayu Khandro, firmly determined to dedicate her life to practice, soon fell ill. After three years of married life, her husband agreed to a separation and helped her enter into retreat.

When Master Togden Rangrig died, manifesting prodigious signs, Ayu Khandro’s aunt also died after remaining in meditation for many days. Saddened, Ayu Khandro closed herself in retreat in the cave where her aunt had meditated, remaining there from her twenty-seventh to her thirtieth year. Afterward she began a wandering life, pausing in various sacred places to practice the Chöd.

At Adzom Gar she met Adzom Drugpa  and received teachings on Dzogchen from Nyagla Pema Dündul.  From there she traveled in company of Lhawang Gönpo, who helped her overcome the rigors of winter, instructing her in the practice of developing inner heat and the practice of nourishing herself on the essence of the elements called chülen. Later they were joined by the yogini Pema Yangkyi, who in the coming years was to become the closest friend and travel companion of Ayu Khandro.

After three months the Master told the two yoginis that in order to reach realization they had to continue their wandering, practicing the teaching of Machig  in cemeteries and sacred places. He also predicted their meeting with two yogins who would prove important for them on their path to liberation. As prophesied, first they met the yogin Semnyi Dorje and after a few months Trulshig Garwang; with them they travelled to central Tibet, to Maratika in Nepal, to Yanglesho in the valley of Kathmandu, and then again to western Tibet as far as Mount Kailash.

After twelve years of intense pilgrimage, Ayu Khandro decided to return to her birthplace: there she was saddened to find the residence of Togden Rangrig completely abandoned. Following indications received in a dream of clarity, she sighted an egg-shaped rock near Dzongsar, but since a river prevented her from reaching it, she camped in the vicinity and practiced intensely. On the third night she dreamed she was walking on a white bridge that crossed that river, and upon awakening she found herself near the rock. Her husband, informed of her return, had a small cabin built in that place, where Ayu Khandro remained in dark retreat practicing Yangti intensively for the next fifty years, going elsewhere extremely rarely. It was there that Chögyal Namkhai Norbu met her and received from her various initiations and teachings; on that occasion, Ayu Khandro also dictated her biography to him.

Ayu Khandro elected to leave her body at the age of 113 years, predicting the tumultuous years that would devastate Tibet. Her body remained in the meditation position for two weeks, diminishing substantially in size.

From The Temple of the Great Contemplation, Shang Shung Edizioni.