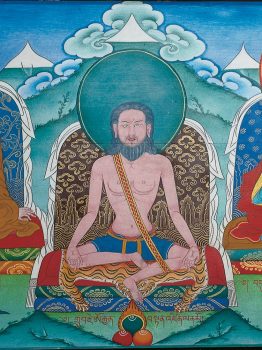 Ugyen Tendzin (1888-1962) was born in Derge, near the hermitage of Sengchen Namdrag, in the Earth Mouse year; his mother was taking part in a practice of one hundred gaṇapūjas dedicated to Guru Rinpoche and celebrated by Lama Ugyen Kyab, his paternal uncle, when Ugyen Tendzin was born without causing her pain.

As a child, he had to look after the family’s animals; when a leopard killed their best goat he became afraid and ran home. His mother scolded him severely, and he, deeply saddened, took refuge in his uncle at the Sengchen Namdrag hermitage and, having received there his first initiations, was sent to a nearby monastery to study. The teacher of the college, however, beat him consistently and after the death of the lama who was his uncle, was beaten even more.

Disillusioned with life as a novice, at the age of nine Ugyen Tendzin left the monastery to become a servant in the house of a noble family. After a few months he was unjustly charged with stealing and, in his desperation, developed the “wind in the heart” condition;  returning home, he helped his father and brother in their work as goldsmiths, but his condition, already unstable, worsened considerably when his mother died.

The yogini Lhundrub Tso, wife of one of the brothers of Ugyen Tendzin and grandmother of Chögyal Namkhai Norbu, advised them to take the boy to Master Adzom Drugpa; as the same exhortation came from Dzogchen Rinpoche Pema Rigdzin, the father eventually took the boy to see the master. As soon as he saw him, Adzom Drugpa understood the origin of his illness and performed for him the rituals for The Elimination of Curses  and The Expulsion of Provocations:  in barely one week Ugyen Tendzin recovered his mental faculties and soon was able to receive the initiation of the Longchen Nyingthig  and dedicate himself to the preliminary practices.

Adzom Drugpa then sent him to the Pema Cave into retreat and asked the yogin Pema Kundrol to accompany him. Journeying for more than one month, Pema Kundrol brought him through harsh zones, cemeteries and sacred places, giving him instructions on Tregchö and Chöd in the process; when they arrived at the hermitage, he taught him also the practices of Guruyoga, Tsalung, and Yantra Yoga and practiced them in retreat for six years, until Adzom Drugpa invited him to Adzom Gar for the summer teachings. Along the way, Ugyen Tendzin stopped to visit some relatives and when he resumed his journey wore a tunic and a hat of fine red wool made for him by his nephew Tsenam, son of the yogini Lhundrub Tso. Those clothes were in the style of central Tibet, and Chinese soldiers, thinking he was a spy, shot him repeatedly, but having visualized himself as Guru Tragpo, he was not wounded by the shots. The soldiers, however, believed he was dead and threw him naked in a river: not knowing how to swim, Ugyen Tendzin invoked his master Adzom Drugpa, held his breath in kumbhaka,  and was able to reach the other bank.

Arriving at the house of a recently widowed woman, he obtained food and clothes and in exchange took her husband’s corpse to the cemetery and practiced Chöd. One of the woman’s sons had been working as an interpreter for the same soldiers who had arrested Urgyen Tendzin and recognized him, spreading the news of his remarkable escape. When he finally reached Adzom Gar, Ugyen Tendzin received from Adzom Drugpa the instructions on the nature of mind and participated in various teachings and initiations conferred by his master and Togden Śākya Śrī.

When Ugyen Tendzin was thirty-four, the master presented him with the ritual instruments of Chöd and told him to roam without a destination like a vagrant, adopting the resolute conduct of a yogin. He then took to wandering in remote places where people spoke languages he could not understand, then going toward central Tibet to visit some sacred places, and finally returning to the Namdrag Cave.

When he dreamed of Adzom Drugpa departing among rainbow lights and the sounds of cymbals, he decided to go to Adzom Gar, where he received the last initiations and instructions the master gave before taking leave. Adzom Drugpa presented him with his own shawl, a bell, and a vajra, and reassured him that they would meet again (in future lives). Shortly thereafter, while in retreat in his cave, Ugyen Tendzin was informed of the death of Adzom Drugpa and with his nephew Tsenam went to pay homage to his remains.

In the following years he alternated periods of retreat with periods of pilgrimage, either alone or in the company of Pema Kundrol, fleeing the fame that accompanied him. Once he dreamed that his master Adzom Drugpa became smaller and smaller until he dissolved in Yeshe Chödrön, the wife of Tsenam; after a short time his nephew came with the news that he would soon have a son, and invited him to be present for the rituals of birth: on the tenth day of the tenth month Namkhai Norbu was born and Ugyen Tendzin recognized him as the tulku of Adzom Drugpa, offering him the scarf, the bell, and the vajra that the Master had given him.

Ugyen Tendzin demonstrated his possession of miraculous powers. It is said that he saved the life of a monk who had been struck by lightning, that he deviated towards himself a bullet directed at an animal, that he could light a fire with a command, and that he was endowed with prodigious strength. As much as he wished to avoid the results of fame, he could not completely refuse the invitation of the king of Derge and for one year and a half lived at the court performing rituals and giving teachings to the king and his ministers. However, feeling that in that place the influence of the demon of the eight worldly concerns was too powerful, he decided to leave and secrete himself in a cave. When the king learned where he was, he asked him to come live in Dri Nyendong Cave, which was easier for him to reach. Ugyen Tendzin agreed on condition that he could stay in strict retreat, and lived there until the death of the king in 1942.

The following year Lhundrub Tso and Tsenam invited him to stay in the Tsarashab hermitage so they could better assist and visit him; Namkhai Norbu, at the age of five, spent a summer with his uncle in retreat in that cave. Later Ugyen Tendzin conferred on the Norsang family and a few others the initiation and instructions of the Longchen Nyingthig.

In 1952 he entered in retreat in a room prepared for him in the residence of Chagö Tobden, an important politician, but when the revolution began the militants confiscated the palace and arrested him. A Tibetan functionary who was familiar with him managed to obtain that he be imprisoned in a hut where he himself could regularly bring him food. After about one year, in 1962 he found the clothes of Ugyen Tendzin in an upright position as if somebody was still wearing them. Looking inside, he saw that his body had become smaller, the size of a three-year-old child, and understood that the Master was realizing the rainbow body. Not being able to say that openly, he made a report to the authorities. A few days later officials inspected the hut and found only the nails and hair of Ugyen Tendzin inside his sheepskin garment that was still upright.

Excerpted and adapted from Chögyal Namkhai Norbu Rainbow Body.
Image from the Temple of the Great Contemplation courtesy of Shang Shung Publications
Reproduced from The Mirror, issue 107, December 2010.