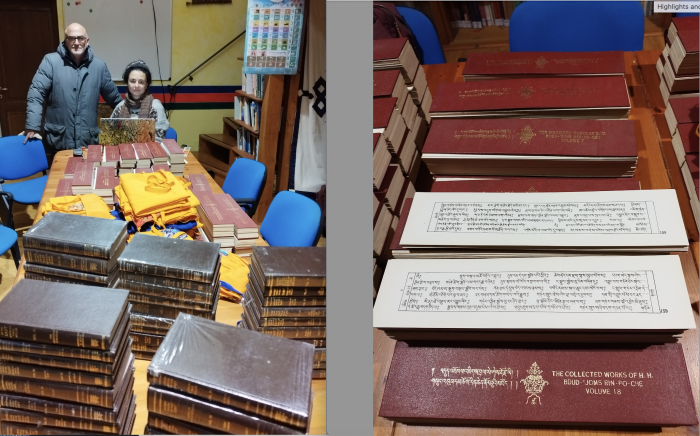 In the last few days, through a ‘fortunate’ coincidence, the Merigar Library has acquired a collection of texts of great importance especially regarding the Tibetan language section of the Ancient School (Nyingma). In fact, volumes belonging to four complete works of important Tibetan Masters from the lineage of Düdjom Rinpoche have been recovered, in particular:

They are works printed by the same publisher at the end of the 70s in India on the initiative of Gene Smith and the TBRC (today the BDRC, Buddhist Digital Resource Center). They are texts that we did not have in the Library and are by very important authors of the Ancient school. In fact we already have other works or partial copies by the same authors.

For the Western section, we acquired 49 volumes from The Sacred Books of the East collection, which contains English translations of Eastern religious texts, edited by Max Müller and originally published by Oxford University Press between 1879 and 1910. The collection now in the library incorporates sacred texts from Hinduism, Buddhism, Taoism, Confucianism, Zoroastrianism, Jainism and Islam, and is an Indian reissue from the 1990s.

By chance, all these works were presented to the Library Merigar for a fee. We thought it was beneficial to acquire them for an ever greater enrichment of our heritage and we hope that you will send your donations to cover the expenses of our Library.

Please find below bank account details for donations. In the description you can indicate the “the LIBRARY project”.

You can also use PAYPAL

Finally, a few thanks, starting from Giorgio Dallorto who helped us to correctly evaluate the material and for having contributed with donations of works he purchased.

Furthermore, we would like to sincerely thank all those who, also in 2022, donated books to the Merigar library: Costantino Maria Albini, Luciano Limonta, Alessandra Livi, Mariateresa Miraglia, Luigi Vitiello, Emilio Sarti, Peter Eisenegger, Sergio Quaranta, Max Leupin and ASIA. We thank the Merigar Study Group, the “Practicing together” online practice group and all donors for their financial support.