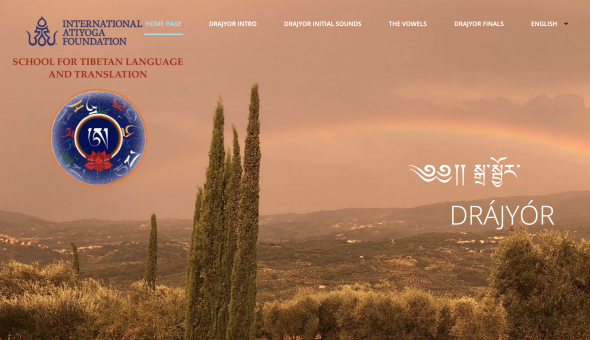 The system for accurately representing the sound of Tibetan language invented by Chögyal Namkhai Norbu, known as Drájyór, is one of His works that has received the least attention by the practitioners of the Dzogchen Community. In general, since it uses Roman letters, it has been thought that a ‘natural’ approach to it might in some way be reasonable.

Unfortunately though, the system is highly technical and any attempt to read its sounds without previously studying it in detail will produce very poor results and the sounds produced will mostly not have any relation to Tibetan Language, whatever the mother tongue of the person trying.

The sounds of Tibetan are rather foreign for non Tibetans, particularly for Western people, and they all seem very similar to each other making it very difficult to identify what is what, let alone pronounce practices and songs with reasonable accuracy. To remedy this problem is actually the very reason for the Drájyór to exist.

The Atiyoga Foundation School for Tibetan Language and Translation has been offering courses on Drájyór for a long time and continues to do so for all students of Chögyal Namkhai Norbu.

To backup these courses and provide a reference for the use of Drájyór, the School for Tibetan Language and Translation is now pleased to offer to all of you the site drajyor.atiyogafoundation.org in which the system is explained in its main features and in which you may listen to a Tibetan (Mr. Lobsang Zatul) pronouncing the various sounds. Since the Drájyór is the same regardless of the mother tongue of its users, the site is multilingual and currently available in English, Italian, Spanish, Chinese, Czech and Polish.

We would really like to add more languages such as Russian, French, German, Portuguese and in fact any other language and are looking for volunteers to translate them. Please write to f.sanders@atiyogafoundation.org if you would like to contribute a translation.