Alix De Fermor, designer and creator of the new Moon Garden that was recently completed at Dzamling Gar, Tenerife, talks about the inspiration for the garden and the many wonderful exotic plants that it contains. 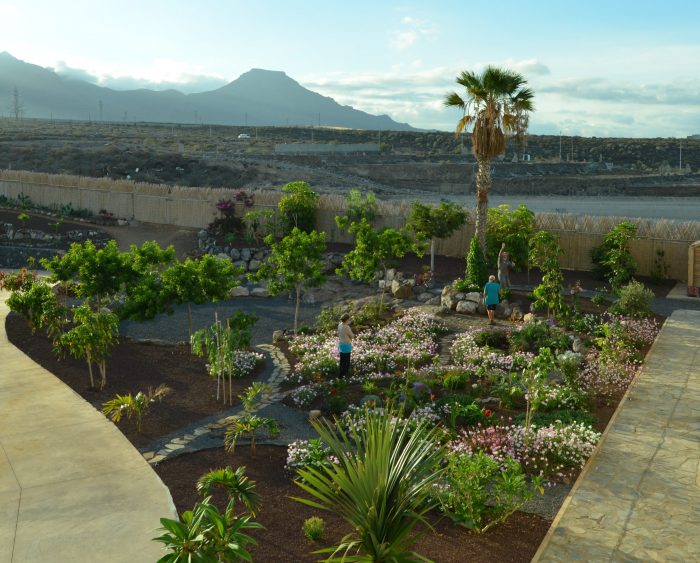 Why a Moon Garden? Some time ago, Jamyang Oliphant suggested the idea and it immediately appealed to me. The idea was to create a space where people could enjoy wonderful moments in the evening, simply sitting, reading a book, or spending time with friends, immersed in the perfumes of a variety of night blooming flowers. I knew that this area of Dzamling Gar would be the right spot because the land is mostly untouched. With all the other gardens at the Gar we had to battle with builders’ rubble and trash but here there is none of that even though the garden wasn’t easy to create. We had to drill through the natural rock in order to ensure that the trees could develop deep sturdy roots.

The Moon Garden is our latest garden and extends on three levels. The upper level covers the area along the upper boundary fence of the Gar and then curves in a moon-shape along the walkway at the back of the IDC/ASIA house.  On this level near the fence there are mostly trees to block the south-east wind and to provide shade around midday. Along the walkway of the IDC house there are mostly flowers, a few bushes, and a couple of small trees. 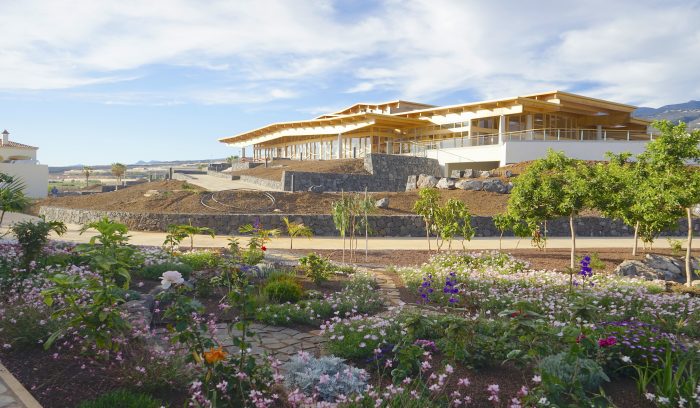 Below this area there is a second level that is actually the heart of the Moon Garden because it is the place where you can sit surrounded by the scents of the plants and gaze into the sky. It’s important to understand that this is not a garden to enjoy at midday. It is meant for the late afternoon, the evening and night, and even the early morning when it is very fresh. It is not a place for children to run wild or play football. 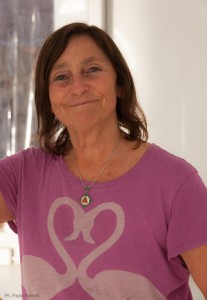 To complete the garden there is a third level, a little lower, that is a natural amphitheatre formed by a circle of rocks, in fact I was quite surprised when I saw that the rocks formed this circle. This is an area for people to do activities together, collective practices, dance, have a barbecue and so on. It has a few mango and red pepper trees around it to define the area and to keep it a little private from the road inside the Gar that passes nearby.

Then in order not to have the Moon Garden surrounded by a wild uncared for area on the hillside along the fence of the Gar, we made a continuation of the garden. This area is a sort of intermediary between something that is more flowery and refined and the natural desert that surrounds the Gar. It is a transitional garden with a lot of cactus, palms, succulents, and an area at the back dedicated to fruit trees such as cherimoya, guava, mango, and sapote through which you can access the south-east side of the Gönpa. We planted trees here in such a way that they will never obstruct the view. The idea is to have privacy but also access to the whole sky. I wanted to hide the road within the Gar but not the Gönpa or the beautiful mountains in the background. In this way the Moon Garden is different and gives a sense of space. 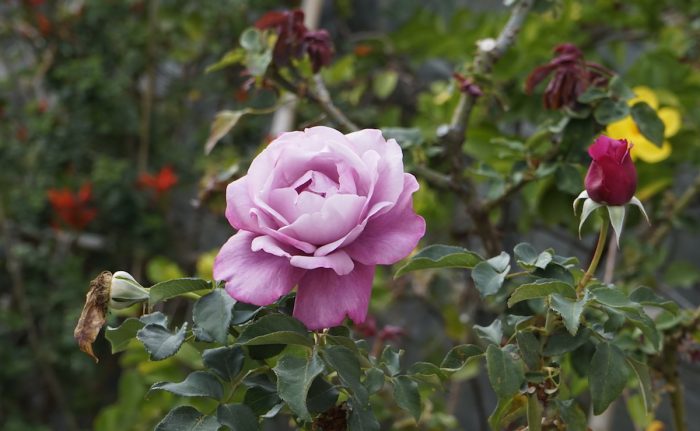 I also wanted to introduce into this garden the notion of time and the passing of time. The pathways are made of bluish grey pebbles, at times associated with stone slabs, which give the impression of a flowing river, symbolizing the flow of time. If you enter the garden from the road surrounding the Gönpa or from the path from the IDC house, you start at the sunset area with trees, bushes, and flowers blooming in different shades of yellow, orange, red, and pink and progressively – but quite quickly because the garden is not very big – you enter the night with its white and silver flowers that reflect the moon and its deep purple-blue and purple-red flowers that reflect the sky. In full moon periods the garden will be magical and silvery with a host of pale pink evening primroses dancing in the wind!

The essence of this new garden is its perfume and the sense of smell because I think that the fragrance of flowers is to the night what music is to a blind pianist. When the sense of vision is limited or absent, other senses take over more powerfully. When you walk in a garden in the nighttime although you cannot distinguish the plants very well, they still reach you with their fragrance that lingers in the air. So in this Moon Garden I have put a lot of plants whose fragrance is exalted in the evening and sometimes through the whole night.

We have the Lady of the Night (cestrum nocturnum) which is a bush with arched branches bearing groups of trumpet-like white flowers that are not very noticeable during the day but which open at night with a very sweet almost intoxicating perfume that permeates the night, lasting until sunrise. 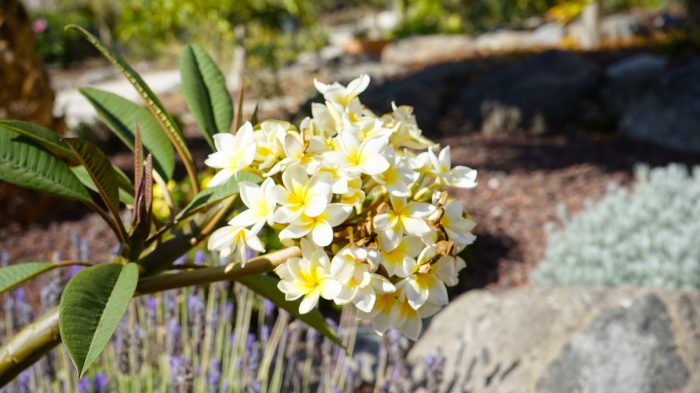 Then there are frangipani trees (plumeria alba) named after a 16th century Italian marquis who made a perfume that resembled the fragrance of these flowers. Plumeria alba (white flowered) and plumeria rubra (red flowered) from the Apocynaceae family have flowers that are most fragrant at night in order to lure sphinx moths to pollinate them. The blooms have five waxy petals in a range of colors from pure white and yellow to deep red, pinks and several sunset varieties. The center of the flower is often yellow, making a striking contrast with the petals. In Buddhism, plumeria symbolizes immortality probably because the tree produces new blooms even after it has been uprooted. It is a sacred tree in Laos and they are planted outside every Buddhist temple. These trees live for hundreds of years. In the Mayan culture, the plumeria bloom represents birth and life. In the ancient Indian healing science of Ayurveda, the oil of the plumeria is considered to be a warming oil and effective in treating fear, anxiety and insomnia. It is also used to treat tremors.

We also have the bauhinia or orchid tree in this garden with orchid-like flowers and a fragrance that lasts through the night. Climbing up the palm are the Moon Flowers (calonyction aculeatum oripomoea alba), which open in large showy white corollas in the evening and have an incredible perfume throughout the night. They’ve been planted just behind the sitting area and I hope to make a pergola for them so that when people are seated, there will be a shower of perfume above them. I don’t know if they will survive the winter because they don’t like cool, harsh winds but in any case they will seed by themselves.

On the other side of the palm, a climber, trachelospermum jasminoides or false jasmine also from the apocynaceae family, is an evergreen woody creeper with white very fragrant flowers which are also used in high quality perfumes. 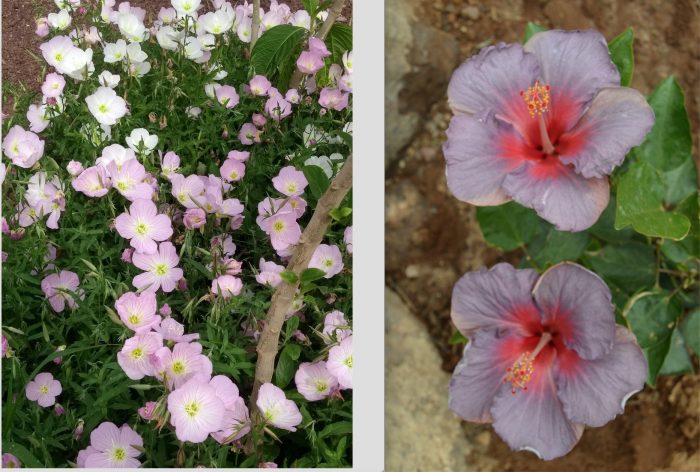 Another important factor in this garden is the evening primrose (oenothera speciosa), a herbaceous perennial sprawling wildflower originally native to the grasslands of southern North America extending to Mexico. It is a drought resistant plant, spread by seeds and runners. And though it is a very sturdy plant, it has a delicate aspect and features masses of fragrant cup-shaped satiny white or shell pink flowers with the texture of crumpled silk. The corollas are quite large, up to 8cm, simple with four petals veined in darker pink. Their heart is deep yellow, nearly green, with yellow anthers and delicately evolves towards white, then pink. Their scent is a bit musky and reminds me of the fragrance of tulips. When I saw the first flower, there were already two bees competing for nectar! The bees love them, which is quite a good thing for the pollination of our fruit tree flowers. We could also probably make some very tasty honey! 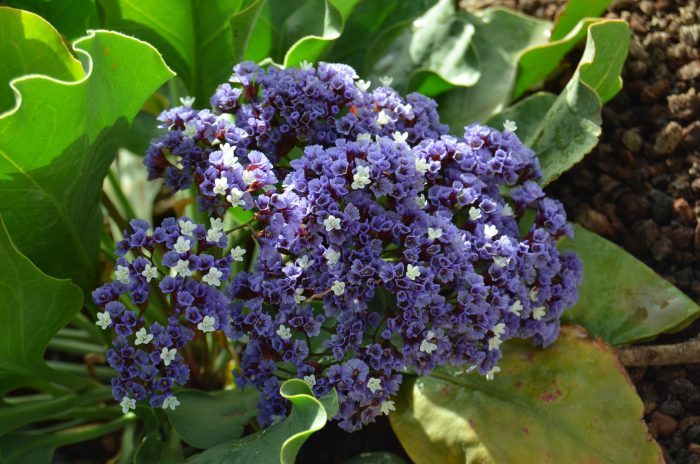 Then there is alyssum (Lobularia maritima), which has a very nice honey-like smell not only in the day but also in the night. Next there is a wonderful selection of roses here that give perfume during the day and the night although in the evening their fragrances are usually exalted.  They include the Monica Bellucci, with its pink with silver reflections, the Charles De Gaulle rose which makes lots of pink flowers, Andre Le Notre, with its pale pink and highly perfumed blooms, Pau Casals with white flowers, Alain Souchon, dark red, Jacques Prevert, bright red, and also a Bettina hybrid tea rose. Then we have Hedychium gardnerianum or Ginger Lily, a plant from the Himalayas, which is quite spectacular with its very fragrant pale yellow flowers and red stamens, held in dense spikes above the bright green foliage. Then heliotrope with its violet flowers spread a wonderful vanilla scent and, of course, there are the lavenders with their unique fragrance evoking the heat of summer.

Over near the fence we have the pitaya, a kind of cactus growing on the upper part of the rocks, also called Dragon Fruit. It blooms in the evening lasting until mid-morning and then withers in the hot sun. It is another very beautiful perfumed flower, makes a lot of fruit and is quite common in Tenerife.

Then last but not least we have a very striking plant called brugmansia or Angel’s Trumpets with an intoxicating smell. There are several bushes of them on the upper level. Bushes were the solution because I didn’t want to block the view from the lower levels of the garden by putting dense trees, yet at the same time I wanted to give some privacy to the garden. At the moment the brugmansia are small plants as are the red frangipani trees but they will grow and fill their purpose. Brugmansia are highly ornamental with their huge pendulous, fragrant, trumpet-like flowers in shades of white, pink, yellow, orange, and red. Here we have a salmon pink variety coming from a cutting from my brother’s garden in France, a yellow one from a cutting on a north Tenerife trip, while the color of the others will be a surprise as they came from seeds bought on internet. 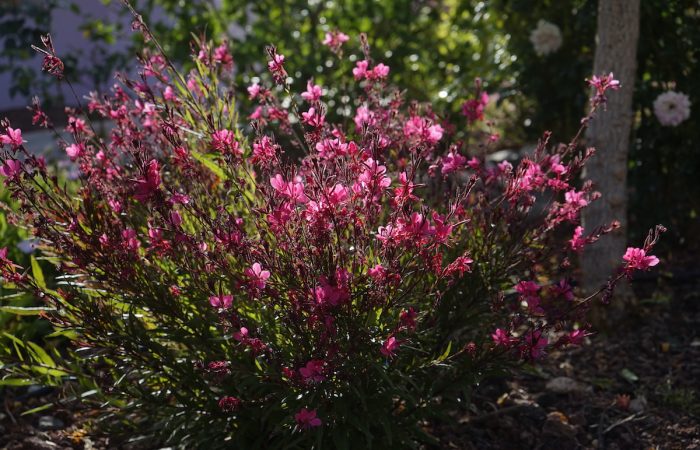 In fact most of the plants and trees in this garden are grown from seeds and cuttings. For example, the areca catechu palms come from some seeds I brought with me from Costa Rica, oenothera speciosa, gaura, the moon flowers, bauhinia, and thespesia populnea are from seeds, while the two bodhi trees, the frangipani and the pandano or screwpine trees are all from cuttings. The Moon Garden: showy but hardly cost a penny!

So whether you are sitting, gazing into the space of the evening sky with the reflections of the sunset coloring the faraway mountains, or walking through the flowing river of time, immersed in scents, with the wind swelling up the instant like a sail, just enjoy! 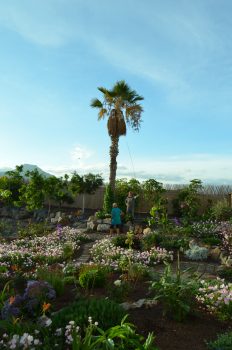