Losar in the Gönpa. Photo by Marija Desal.

Merigar West celebrated the start of the new Tibetan Year of the Water Tiger with a variety of activities and practices. In collaboration with the Dynamic Space of the Elements several practices particularly auspicious for welcoming in the new year were organized as well as the preparation of the famous Tibetan Gutug soup. Besides the people allowed to participate in person, in respect of the current emergency regulations still in force in Italy, this year those who wished to participate in the annual festivities could also do so comfortably online from their homes.

On March 1 the day began with a short fire puja to burn old lungtas, Namkhas and so on, while in the evening people gathered to enjoy the Gutug soup. The last day of the Metal Ox year, March 2, there was a purification of the Six Lokas practice in the morning and a short Ganapuja in the evening with thanks and dedication for those who have contributed/worked with the Community of Merigar over the year. 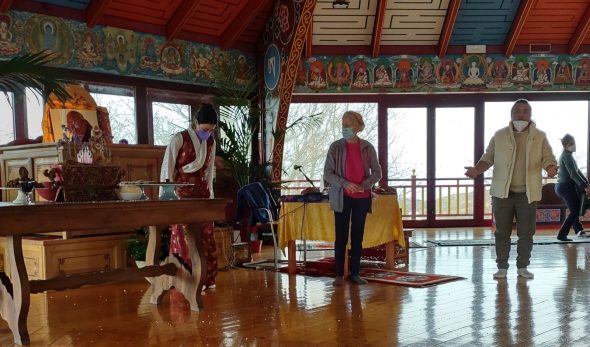 On Losar, the first day of the new year, March 3, celebrations began with the “star water” for washing before sunrise, followed by Mandarava practice, then a Ganapuja in the evening with a ritual to authenticate Namkhas and lungtas. With the morning practice held at the Gönpa, there was a ceremony with different types of offerings in the presence of Rosa Namkhai who gave a very inspiring message to all those present.

On the third day of the Water Tiger year the Sang practice was followed by the hanging of the new prayer flags and a presentation by Migmar Tsering on the aspects of the new year according to Tibetan astrology.

Easing Out of the Pandemic. Summer at Merigar

The situation regarding the pandemic seems to be improving and we expect the situation to get better and be similar to last summer. At Merigar there are plenty of open spaces and many activities that can also be done outside. Last summer we could do activities inside the gönpa and since it is very open and there is space outside people could participate more easily.

At the moment we are waiting for 31 March when the official emergency situation ends and the government will be presenting new regulations. The green pass has made the situation at Merigar somehow complicated, and we hope that some of the limitations will be lifted after that date. 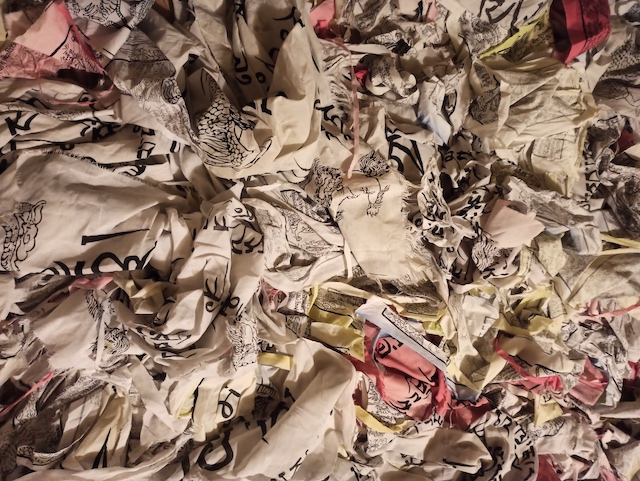 Merigar and the Situation in Ukraine

At Merigar we have already considered which actions we can implement in addition to simply sending concrete aid. We also thought of raising some money, provided that a professional organization is clearly identified for managing the collected funds in a safe, effective and well targeted way. We have been in contact with the International Gakyil, with ASIA and the Dzamling Gar Gakyil in order to coordinate our efforts and obtain the best results.

Several Dzogchen Community Lings from countries bordering Ukraine such as Poland, Czech Republic, and Romania, have offered some help to our practitioners leaving Ukraine. It is important that people in need know that there is a certain path that has been drawn, and to match requests and availablity. There is a website with information about the different Lings offering space to refugees.

We are managing several projects that are still active. The most important one at the moment is the multimedia archive of the Dzogchen Community which is now officially the responsibility of Merigar, after the dissolution of the Shang Shung Foundation. We have a clear idea about the hardware and the contents, which are enormous, and we have some ideas on how the  various kinds of material can be offered to our Gars, Lings and practitioners, and also in some cases to the general public, and other interested audiences. This needs though to be discussed with other entities of the Dzogchen Community and especially with the Namkhai Family, who are the owners of Rinpoche’s heritage. 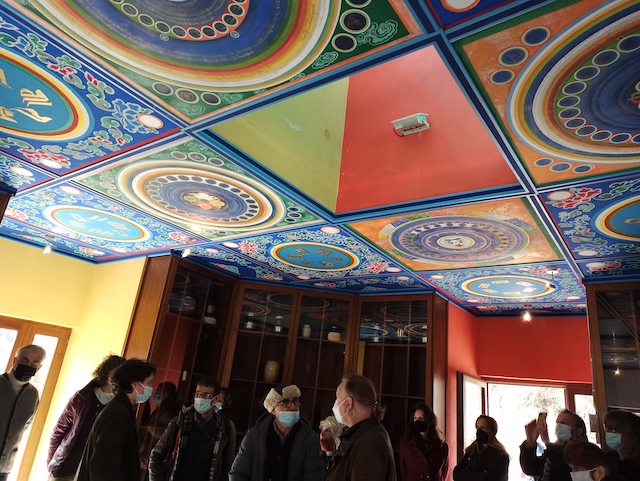 Practicing in the cinerarium. Photo by Marija Desal.

The project for water drainage, which includes the area around the two small natural reservoirs on the slope below the Yellow House and the drainage system that takes the water from the house, has almost been completed. The final part of the project that still needs to be done is to create a protective barrier around the reservoirs and the planting of some more trees, plants and grass, to restore the landscape after the works that have been carried out.

We have been working, and are still working, with a geologist to monitor the land and eventually seek some assistance from the provincial authorities or possibly funds from the European Union. With her help we are building an annual check plan to follow a thorough control of all plants and the structure of Merigar’s land and buildings. A good and constant control of land and buildings beside being the best way to save money on extraordinary interventions, is crucial to keep everything in good shape and beautiful.

Together with Fabio Andrico and Pelzom Films we are involved in the development of an app called Evolve, focused on yantra yoga and breathing. The app, part of a project with UBI (Unione Buddista Italiana), is almost ready and at the moment we are  investigating how to promote and use it. The app is intended for people within and also outside the Dzogchen Community.

Breathe the Earth is a another UBI project that we have been working on with ASIA Onlus and involves working in schools aimed at promoting the well-being and social-emotional development of children through activities that involve a concrete application of Buddhist principles and values. In September 2021, the project started in the primary schools of the municipalities of Mt. Amiata, Rome, as well as in Naples, Italy, thanks to funding from the Unione Buddista Italiana.

It’s important to point out that while the UBI supports several projects, their funding only covers about 60 or 70 percent of the expenses., while the rest has to be covered by Merigar.

There has been a slight decrease in the membership and it is not easy to increase it as most of the members at Merigar West are getting older and there are not a lot of new members joining. Even though we still have a strong membership, the income from it doesn’t cover all the expenses of Merigar so we have to find ways to support the structures at Merigar, compatible with its nature and with Rinpoche’s vision. 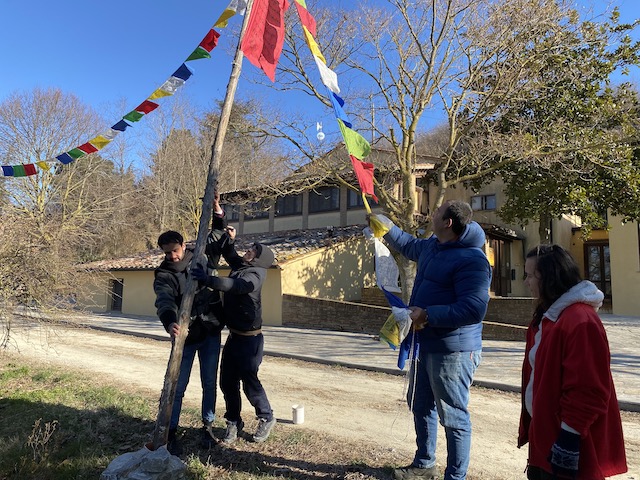 We are planning to present all of these issues both to Merigar’s Lings and at the Annual General Meeting of all members in May/June. It is important that all members are aware of the situation and that we reflect and act on them together.

We are a relatively new Gakyil and it has taken us some time to sufficiently understand the complex situation at Merigar. We are aware that our members would like to have more information, and we are trying to do so, with periodical Newsletters, with article such as this one, and through meetings, when it is possible. It is not easy, but we will try our best to do so. 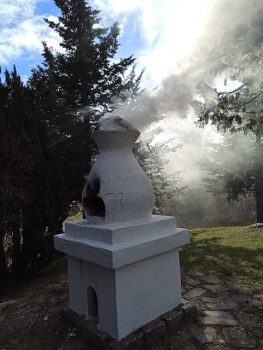 One of the sangkang at Merigar. Photo by Marija Desal.