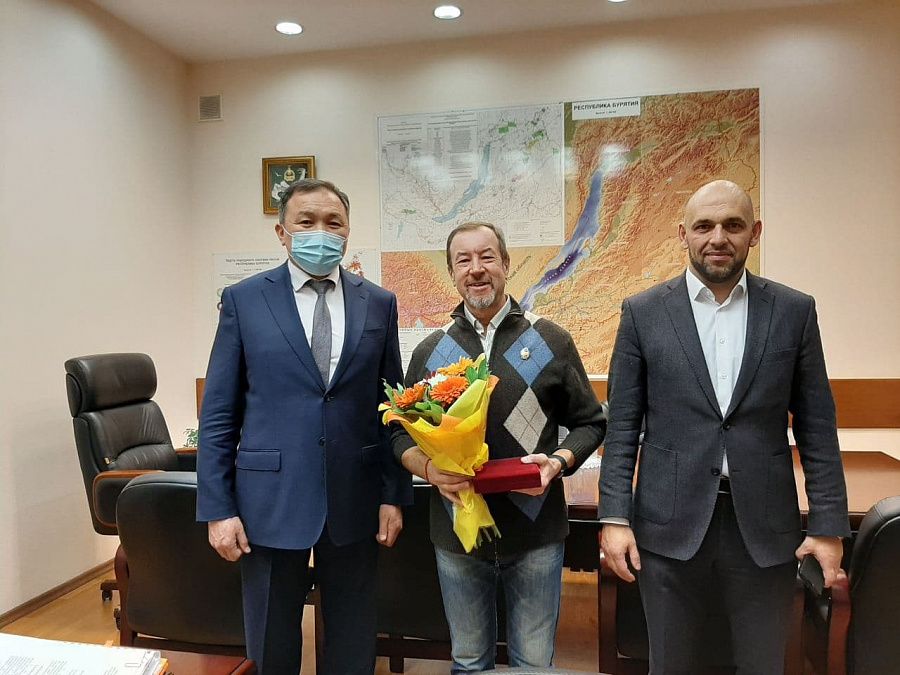 November 17, 2021
Nikolai Dudko was awarded the title
“Honored Artist of the Republic of Buryatia”

The ceremony was attended by Acting Minister of Culture of Buryatia Nikolai Emonakov, who also congratulated the artist and wished him new creative success.

In turn, Nikolai Dudko expressed his gratitude to the Government of Buryatia, the Ministry of Culture of the Republic, for the attention paid and conferring the title of “Honored Artist of the Republic of Buryatia”, noting that Buddhism is not just a religion and wise philosophy, but also an inexhaustible source of inspiration to create all the new works of art.

Several masters of this unique and ancient painting tradition are working in Russia today, their works can be found in Buddhist temples, datsans, as well as in private and museum collections. The most famous of them is the thanka artist, philosopher and popularizer of Buddhist culture – Nikolai Dudko.

Nikolai Nikolaevich Dudko was born in Dessau (Germany). However, he hardly remembers the well-groomed European city. But the ancient Buddhist culture of Buryatia, where his family later moved, made a strong impression on him. As long as he can remember, he has always painted. Initially, he was interested in European painting, which he studied at the pedagogical college in Ulan-Ude, and then at the Kiev Art Institute. He successfully held three personal exhibitions in Kiev, but, as it turned out, Buddhist culture sunk into his soul deeper than he thought. In 1986, Nikolai returned to Buryatia, where fate brought him to the Lama Dharma Dodi, who became his spiritual mentor. He introduced him to Buddhist philosophy and religious practice.

Later he met with his main spiritual teacher Chögyal Namkhai Norbu. The desire to comprehend the art of religious painting deeper, led Nichoi first to Mongolia, where he studied the secrets of this ancient craftsmanship from the wonderful Mongolian restorer Khishigbayar, and then to Nepal and India.

In 1995, he came to Dharamsala (a city in Northern India, where the residence of H.H. Dalai Lama XIV is located), and sought a reception from the personal thanka artist of the Dalai Lama himself. Gen Sangey Yeshe then no longer accepted students, but when he saw the photographs of the thanka painted by Nikolai, he agreed to teach him. Nikolai studied so intensively that in two years he mastered a five-year course of study and received a diploma of a traditional Buddhist painting artist of the Men-ri style thanka with the right to teach. In addition to painting thankas, he studied Buddhist philosophy and the Tibetan language.

Upon returning to Russia, the artist works a lot. He not only paints thankas, but the desire to acquaint people with this amazing art encourages Nikolai to teach and hold exhibitions of his works.

His exhibitions are held not only in many cities of Russia, but also in many countries of the world: in Ukraine, Mongolia, Argentina, China, Italy, Spain and everywhere with great success. The popularity of Nikolai in Buddhist regions and countries suggests that he really managed to achieve a high level of skill.

Over the past five years, Nikolai Nikolaevich has held several major solo exhibitions in Russia and around the world.

The most iconic ones are:

Nikolai Nikolaevich’s works are in the collections of major museums in the world, such as the Museum of Eastern Culture in Buenos Aires (Argentina), MACO Museum, Arcidosso, Italy, the Irkutsk Art Museum, as well as in private collections.

The purpose of the thanka is to help one to understand the main points of the teaching and establish a connection between the devotee and the prototype of the Enlightened One. Thankas are used for meditation. There is not a single random detail in them. Therefore, it is important to follow the canon. Nikolai Dudko paints thankas the way the icon painters have painted for centuries in ancient times. It takes an artist up to one and a half years to create multi-figured compositions.

Nikolai Dudko succeeded in what he considers his destiny. The aim is to convey to the modern world the ancient secrets of sacred Buddhist art.

Translated and reprinted from the Ministry of Culture of the Republic