Hosted by Menpa Phuntsog Wangmo and the School of Tibetan Medicine 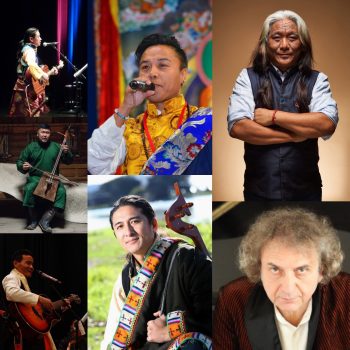 On October 23rd, Menpa Phuntsog Wangmo and the School of Tibetan Medicine hosted an online concert in honor of Chögyal Namkhai Norbu to celebrate his inestimable contribution to Tibetan Medicine and Culture. The date of the celebration was chosen to due its nearness to the anniversary of Master Namkhai Norbu’s parinirvana, and also coincided with the birthday of his precious wife, the dakini Rosa Namkhai.

The concert was attended by a small international audience. Oliver Leick, our guest speaker, eloquently articulated the virtuous context of the concert, honoring Professor Namkhai Norbu and sharing a little of the infinite richness of his extraordinary life. He then prepared our minds and set the mood to relinquish distraction and enjoy the performances with presence and awareness by speaking on the spiritual dimension of music.

Techung, a Tibetan folk and freedom singer and composer was the show opener. He is best known for his performances of traditional Tibetan music and opera. His majestic and commanding presence provided an auspicious opening to the event. Listening to his music, you could sense the continuum of centuries of the form articulating itself through his masterful and stately performance.

Alexander Arkincheev, an Irkutsk-based multi-instrumentalist and renowned diphonic throat singer, performed next, providing his listeners with something most of us had never experienced before. His unique style, performed with rare traditional instruments and techniques yielding incredible soundscapes, was like a cinematic evocation of his legendary homeland. A great thank you to the School of Tibetan Medicine in Russia for enlisting his participation.

Roberto Cacciapaglia, Italian composer and pianist, and leading innovator on the international music scene, performed next. A consummate performer, and exceedingly gracious collaborator, he began his set with a song he performed for Namkhai Norbu himself on occasion. The performance was breathtaking; the juxtaposition of his style beautifully augmenting the preceding performances, reshaping them into something new and complete in the mind of the listener.

The second half of the concert was presided over by the Tibetan musicians Lobsang Delek, and his companions, wonderful performers in their own right, Tshering Wangdu and Dhundup Kalsang. Tibetan artists in diaspora currently living in France, their music is deeply rooted in Tibetan culture. Lobsang Delek was a huge help in organizing this event, and the group’s enthusiasm and dedication to the concert was inspiring. They delighted and charmed the audience with a series of traditional Tibetan songs that transported Phuntsog la to the days of her youth, and had the rest of us smiling if not dancing in our seats. These young musicians’ earnest devotion to their art and culture, as well as their appreciation and decorum in respect to the other musicians in the concert, was a joy to behold.

The final performance of the concert – by accident at the time, but in hindsight meant to be – was Tibetan artist Tenzin Choegyal. While continuing the lineage central to his music, Tenzin is an innovator of contemporary forms. His contribution was a set of two pieces of music: a powerful variation on his Grammy-nominated Songs from the Bardo, and a deeply moving spoken word poem. By the end, we had been transported to healing fields of open awareness and real delight. As Menpa Phuntsog la explained in one of her epiphanic capping remarks after each performance, music is indeed medicine.

Our heartfelt gratitude to the wonderful musicians and all of you who joined us for this special event, helping us to remember and pay homage to our Precious Teacher, that “Master of life” as Constatino Albini says, “who taught us to become complete human beings”.