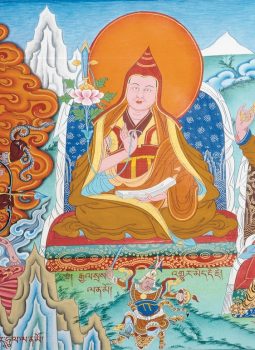 Gyalse Gyurme Dorje (1895–1969) was born amid many marvelous signs as the third son of Adzom Drugpa. From an early age he remembered clearly his previous lifetimes and was recognized by Jamgön Kongtrul as the emanation of the great Master and tertön Terdag Lingpa.

His father, Adzom Drugpa, was his most important Master and transmitted to him all the instructions of Dzogchen, from the preliminary practices up to the advanced stages of tregchö and thögal, and in particular the complete teachings of the Secret Essence, the Cetsun Nyingthig as well as his own termas. Gyurme Dorje practiced these teachings diligently until he realized their fruit. He also studied sutra, tantra and many other fields of knowledge under other Masters.

Later on Adzom Drugpa decided that his third son should be his successor at their main seat at Adzom Gar and consequently, on his death, all of his numerous disciples considered Gyurme Dorje as inseparable from the Master and even the older students, overcoming all their hesitations, prostrated at his feet recognizing him as their spiritual guide.

Gyurme Dorje followed the instructions of his father and continued to teach, bringing immense benefit to beings and becoming a key figure most of all for the spread of the Dzogchen teaching in recent times. He was also the author of several important commentaries and treatises including the ‘Commentary on the Bhadracaryapra idhana’ and ‘A Drop of Amrita’, a word by word commentary on the short exposition of the path of illusory net (Mayajala)’. Moreover he had the woodblocks made for the famous text edition known as Adzom Drugpa Chögar, which consisted in newly publishing important texts from the Buddhist tradition including the ‘Seventeen Tantras of the Ancients’ and the ‘Longchen Nyingthig’ of which this is considered to be the best edition of the works of Longchenpa. Through visions Gyurme Dorje received the transmission of many terma from Padmasambhava but decided not to transcribe most of them, choosing to transmit more ancient terma.

He was the Master of Tarthang Tulku, Rago Chogtrul, Tulku Losel, Tulku Kunga and also of Adzom Drugpa’s tulkus, Namkhai Norbu and Drugpa Rinpoche. In 1958, Gyalse Gyurme Dorje was arrested and held in prison where he began to give teachings to other prisoners. He died in 1969 amidst many marvelous signs.

Based on the biography that appears in The Temple of the Great Contemplation, Shang Shung Edizioni.