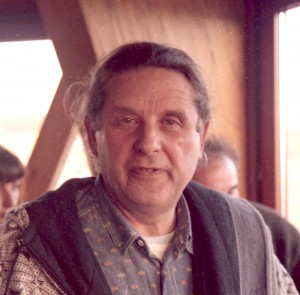 Gianni Dejure, one of the pioneers of the French Dzogchen community, passed away on Sunday 15 March, and was cremated on Friday 20 March in Père Lachaise cemetery in Paris, France. He was a skilled sculptor and many of us remember many of the statues he did of Vajrasattva, of Guru Padmasambhava, of the Guardians, of Buddhas etc..

His family is very grateful if practitioners can remember him in their practices.

Homage and Long Life to the Master

In memory of Gianni Dejure, we are publishing below part of an interview that The Mirror published in December 1990, in issue 6, for a section of the newspaper called ‘Faces in The Mirror’.

Faces in The Mirror – Gianni Dejure

The Four Noble Truths and the Eightfold Path 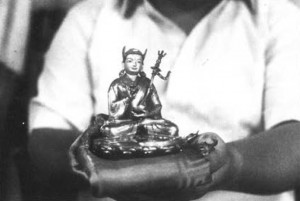 Often I’ve been asked to talk about my work. It seems that it needs to be explained. Every time I have been asked I have been puzzled by the question: “What do people want to know about my work?” Of course rather a lot could be said, but as a matter of fact, my work is not mysterious: it can be seen, it can be touched, it speaks for itself.

Well, this work first of all is an act of disobedience, next a search for ever-lost innocence and last but not least, an attempt to love and live better. I have always believed, and I still do, that a task done with care and diligence, with love and perseverance, will justify itself and find its own reward and accomplishment.

My dissatisfaction with society is based – not on a refusal of conformity – which can be acceptable when it is decent – but on my refusal to participate in the “system” and its surrounding waste. As long as a child dies of starvation on our small planet, our “system” doesn’t grant the slightest relief to the suffering of humanity and we are inclined to become unsatisfied and also cruel. But I’ll leave the task of enumerating the deficiencies of our samsaric society to others, this is not my purpose. My purpose is to refuse my complicity. That’s all.

One of the reasons I like my work is that through it I met the Four Noble Truths and the Eightfold Path, and later on my Master Namkhai Norbu Rinpoche. And it is through his living teaching that I finally succeeded in putting some order into my confused search for freedom. A lot still has to be done!
By the end of the seventies the petroleum shortage put an end to my brilliant career in the data processing world. I was ‘fired’ and found myself, overnight, without a job or hope of reinstatement, as I was considered too old, at 36, to be a data processing business engineer in a highly competitive context. The marketing school I attended later on, in order to retrain myself, confirmed my intimate, firm belief that our so called “Liberal Avancee de Consommation” society was on a bad course, having lost its common decency.

As usual, we think that something has to be changed – it has always been the same through the ages. But it never occurs to us that if there is something to be changed, it might be us. So, waiting for this change to happen, I remembered all at once that when I was a student I had attended ‘Beaux Arts’ in Paris, for more than one year. I started to sculpt again in order to keep myself busy and within a few weeks I “gave birth” to a bust of Julius Caesar, then one of Augustus, not to mention Caligula, whose demonic glance became the cause of his destruction. I couldn’t stand this gaze any longer, so I suddenly decided to bring things to a head: in a sort of murderous rage, I settled his hash with a hammer, Then I allowed myself a break from the tyrant, and went to the Musee Guimet, with little idea that this day in June would be the turning point in my life.

For the first time I was struck by Oriental aesthetics, which I had never met before. Something peaceful emanated from those sculptures, especially from their faces. I found myself sitting in front of a majestic Thai Buddha, whose ineffable smile and elegant attitude gave him such a noble aspect that I felt stupefied with admiration. I said to myself: “My God!” two or three times, almost breathlessly.

I spent days and days of my life trying to reproduce that strange smile, which seemed to be beyond time. I tried to catch it. I came to the conclusion that behind this smile there was something to discover. I bought myself some books on Oriental Art, with beautiful polychrome images and I literally plunged myself into the discovery of Buddhist Thai art through the centuries. In this way I learned about the innumerable styles of this art and its evolution through places and time. A peerless explosion of artistic invention. Unfortunately all this did not improve the quality of my sculpture’s smile. Then, finally I understood that it was necessary to penetrate the meaning of this smile.

Since then I’ve been on the Path. Little by little I homed in on Tibetan Tantric Buddhism, Vajrayana, and then on the living teaching of my Master, the refined gold of the wisdom of many lineages of wise men. That happened apparently by a mere chance. I remember that the Master encouraged me to continue with this work, not only as an aesthetic research, but also to make a living out of it. I remember listening to him with veneration, and undertook the task full of enthusiasm.

My work is exhausting in the long run and needs a lot of application. It strains my eyes and cannot be done in any way but standing solitarily. Movements must be precise and slow. There is no room for automation, no machine can be used in any circumstance and each piece must be carefully treated in all its details. The golden leaves are laid one on top of the other, often 3 or 4 times, in order to obtain a perfect brilliance. Each time I must repaint, go over the same details, polish and polish again. No piece will come out of my hands if it doesn’t mean anything to me: if it doesn’t recall to me the first impression I had when I saw the Buddha statue in the Musee Guimet. Although they come out of the same matrix, none of them, in the end, will be identical…

One of the great joys that my work gives to me is that in the end the formless matter surrenders and delivers its reward. Then another miracle takes place: the captive image gets free, flies away to the ten directions, carrying through the world our hope to see our wishes become true. Also I am delighted when those who like my work show, through their attitude, that they take into account the spirit of it, not only the matter. I will never forget the attention and love given by a young Indian lady to a small statue of mine of Sakyamuni Buddha during a retreat in England. But many others have also honoured my work with their pure minds, free from prejudice and speculation, and I want to take this opportunity of saying “Thank you” to all of them.