On 18-26 March 2016 in the presence of Chögyal Namkhai Norbu, the first exams in the history of the international Dzogchen Community of Khaita Joyful Dances were held at Dzamling Gar in which 60 students from 16 countries participated.

In order to pass the exam the candidates for Khaita instructors had to learn 50 Khaita dances based on 50 modern Tibetan songs, specially chosen by Rinpoche. Most of these songs talk about Tibet as a country where the Dharma teachings and spirit are maintained.  That is why Tibetans encourage the preservation of Tibetan culture and Tibetan language through the poetry of their songs. The main topics of these songs are love of their homeland, family, friends, nature, native language, Dharma, and spiritual teachers.

The candidates had to know the singer’s name, the meaning of the song, the region from which each dance comes, the dance steps and movements, choreography, as well as how to apply the three principles of Khaita dances — ldem, gyu and ‘grig (harmony, movement and coordination of the movement with music) — and how to clearly explain to others. 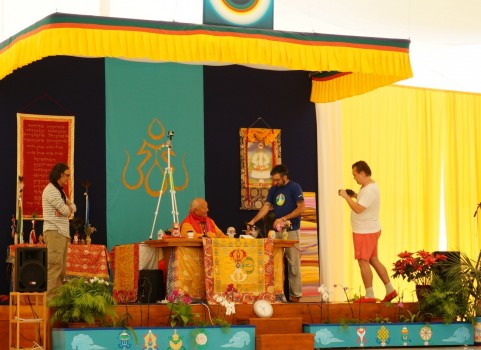 A candidate picks one of the songs from the list of 50. Photo Mila Marchulenete.

During the examination each candidate came up to Rinpoche and randomly took from a vase his or her ticket with the number of one of the 50 dances. Then they had to explain and teach the dance to a group of people from the audience.

Many dancers of different levels of preparation gathered together to take this exam, but thanks to the training that had preceded the examination everybody had a chance to learn and train together.

The preparation itself was reminiscent of a drubchen: people danced everywhere — in the Gönpa, cafeteria, the dancers’ apartments — and almost all the time, with short breaks for sleeping and meals. 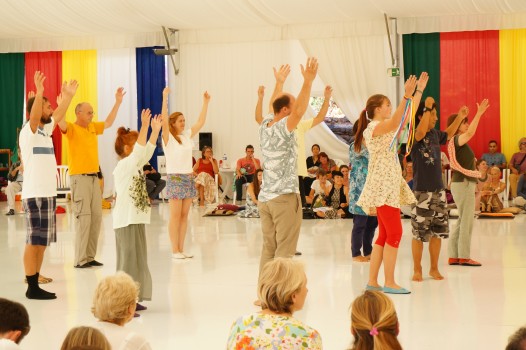 An aspiring candidate teaches a dance to volunteers from the audience. Photo Mila Marchulenete

Right after each of the examinations I was able to talk with most of the participants and ask about their impressions during the exam. Many of them said that at the beginning they had an experience of emptiness, after which they had some clarity about what and how they should do. Others commented that in this clarity they felt participation and support from the whole audience and especially from Rinpoche. Many participants said that they experienced something beyond words, joy, openness and space. Somebody was nervous, and somebody felt very relaxed and happy. Someone recounted that this examination was a kind of healing experience and an unforgettable event in their life, a bright example of collaboration.

From my side I can add that during all the examinations there reigned an atmosphere of ethereal joy and happiness despite all the emotional stress of the participants. Everybody was immensely grateful to Rinpoche for this opportunity. In conclusion, Rinpoche thanked everybody who participated and who understood the importance of this event, and gave every new instructor a hand-made present — a necklace or a bracelet of Evolution Creations consecrated during the Mandarava drubchen in February 2016.

Several days later, on 31 March, at Dzamling Gar, there was the official delivery of diplomas to the new Khaita instructors and a gala-dinner with the participation of Chögyal Namkhai Norbu, the CID president, local authorities, and Shangpa Master Denys during which everybody could celebrate.

There are no words to describe the joyful wonderful atmosphere you could almost “breathe” in the Gönpa of Dzamling Gar on March 31st in the presence of Chögyal Namkhai Norbu, Shangpa Master Denys, Alkis Raftis, the president of CID, (International Dance Council) and the Adeje town counselor of creativity development, sport and knowledge. Other town counselors from Guia de Isora and a dance teacher from the Adeje College of Art and Music joined in later.

At the beginning there were the usual introductory and welcoming talks which included presenting professor Raftis to our Community. He is the president of CID, a non-governmental organization founded in1973 and based in the headquarters of Unesco in Paris. The CID, official partner of Unesco, brings together the most important international, national and local dancing organizations as well as individual dancers. Chögyal Namkhai Norbu met Prof. Raftis in Moscow in 2011 at the Dzogchen Forum organized by Silvano Yeshe Namkhai and soon after a mutual collaboration started with Vajra Dance becoming part of the global dance directory of CID and, lately, also Khaita Joyful Dances.

After this very short presentation it was the turn of Rinpoche to speak and he was visibly happy and satisfied, emphasizing the importance of this Khaita event and of the official recognition by CID of what we are doing. He added that dancing is an art, because art can involve body, speech and mind, it is not only painting. Then he went on to say that the principle is not that we sing and dance because he is Tibetan. Tibet is an isolated country, which has, however, kept alive authentic knowledge for centuries and centuries. The Buddhist spiritual path, Sutra and Tantra have spread everywhere, but the origin, the source, are the collections of the 108 volumes of the Kangyur and of the 200 of the Tangyur translated from Sanskrit into Tibetan and not existing in any other part of the world. Now Tibet has become part of China, the official language is Chinese and in the course of two generations the Tibetan language might disappear. So Khaita is a way, continued Rinpoche, to support Tibetan language and culture. But there is also another reason for Khaita: our citizens are always agitated and restless and Khaita is a very useful practice to help people to become more joyful and relaxed. For this the presence of the local authorities is very important here – said Rinpoche concluding his short but very meaningful speech – there are representatives of the IDC from all over the world and after a long training we have qualified 60 people who can be considered qualified experts and possible instructors in the future. 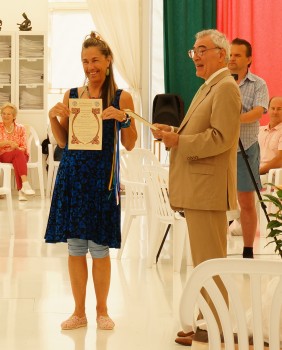 Then before delivering the CID certificates to Vajra Dance instructors and dedicated Khaita students, Professor Raftis made some very important remarks, some of them “official” as president of CID and some at more personal level. In fact, he said he was more than happy to deliver CID certificates because Khaita dances totally embody the spirit and ideas of UNESCO and the UN by bringing together people from all over the world who, through dancing, promote peace, harmony, and understanding. UNESCO gives priority to small and poor countries and even if “you” – he said – “come from countries which are neither small nor poor, you promote the ideas of UNESCO considering yourselves citizens of the world”. He added that now more than ever the whole of mankind is threatened by discrimination, lack of respect, the effects of the financial crisis, terrorist attacks and that is why Khaita is so important because it emphasizes respect for humanity and its real values. Then he shared his personal feelings with us, saying that Khaita is not only a practice, like ballet, tango or flamenco and so forth. There is a ” theory” behind Khaita dances because they are strictly linked to a vast culture and history from which they are inseparable. That is why – he concluded – “I have a profound respect for what you are doing”. 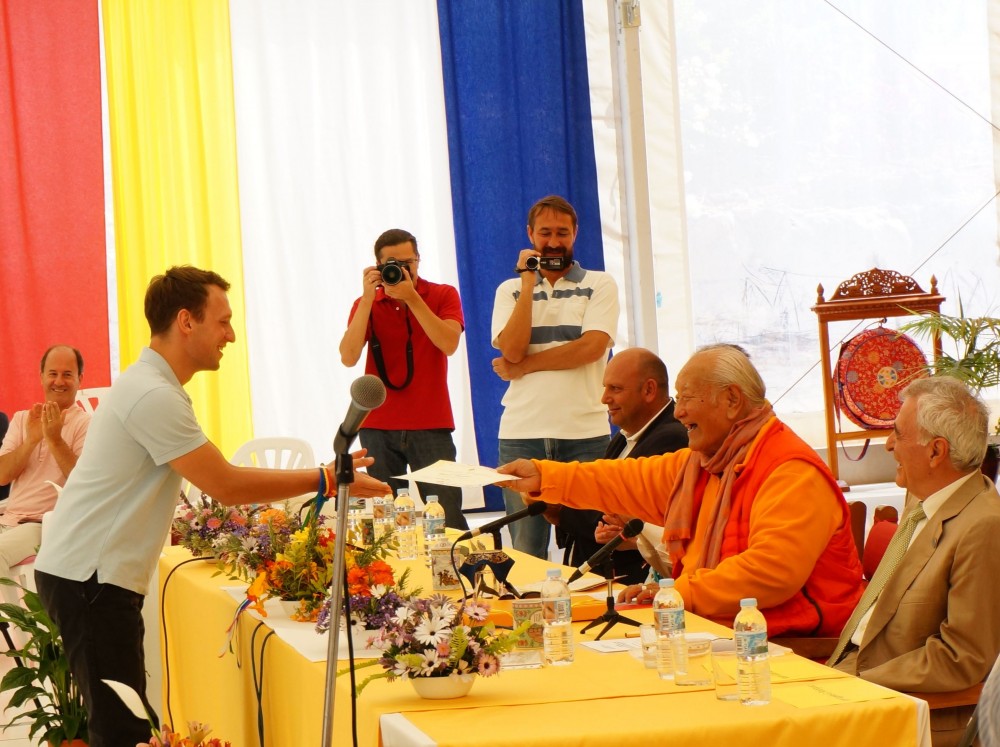 Then Vajra Dance instructors and Khaita students were called one by one to receive their certificates, with a lot of clapping and laughing. But it was also an intensely moving moment for everyone which increased even more when Rinpoche started giving diplomas to the newly qualified experts, 60 altogether, from the youngest one, Elia, as Rinpoche underlined, to the oldest one, Elisa. Then there was a demonstration of Vajra Dance and soon after the experts performed 10 dances which were visibly appreciated by all the guests. Then there was the delivery of the Gonpa book as precious presents to all the guests and to follow lunch for the authorities sitting with Rinpoche at a long table, and for all the others food provided by the Dzamling Gar coffee shop. Really a great day, a milestone in the history of Khaita, the first visible concrete manifestation after almost five years of untiring work on the part of Rinpoche and his closest collaborators. 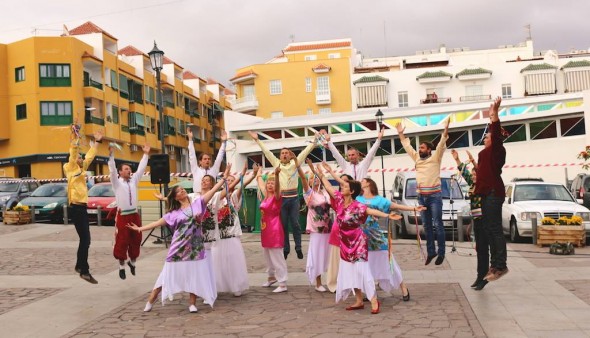 Then on the following day in Playa San Juan there was a public performance of Khaita in the church square in collaboration with the local authorities of Guia de Isora, very successful indeed thanks to the competence of our dancers and the involvement of the public invited to join in at the end of the show. We had planned a couple of dances to practice together but the enthusiasm of the public was so great that they asked for more and in the end we danced five dances with them.

On Saturday and Sunday morning some of the qualified experts had the opportunity to teach simple dances and basic steps to total beginners who joined the two workshops which had been organized to conclude the Khaita festival program.

At the end of this brief report I would like to share some of my personal feelings and experiences as the oldest of the group. In spite of my age and some evident problems with my legs, I have been really dancing a lot these last four years and realized that, once I have really learnt a dance and fully integrated its movements into my body, speech and mind, I feel that it is pure energy carrying me around, not my legs. In fact it is as if I had no more weight, a really wonderful sensation shared, I am sure, by many other dancers. More presence and the marvelous harmonious power of energy driving us along – precious gift of our Master!

Then I noticed that since Khaita started and more and more practitioners have been dancing and dedicating themselves to it, we are all more open, friendly, smiling and supportive of one another. There is the feeling of being together, of sameness, of no duality, of no judging. It does not really matter if you are a skillful dancer, a less skillful one, a beginner, there is no judgment, only the joy of dancing together in presence and harmony applying the three principles Rinpoche has explained several times: ldem, harmony, gyu, movement and grig, coordination, aware of respecting each others space. And happy to be part of our Khaita ‘boat’ fully integrated and connected with our Dzogchen Community boat, a unique body with several arms and legs moving together in harmony and space according to the meaning of Khaita.