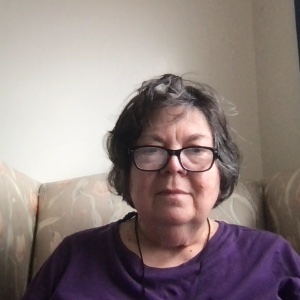 The Mirror: Jacqueline, you are quite an accomplished poet. When did you first become interested in poetry? When did you notice your first impulses?

Jacqueline Gens: Not sure about early childhood, but definitely around 13 years old when I happened to hear the voice of my future mentor, the late poet Allen Ginsberg on television; he had just returned from India. I distinctly remember thinking, “I want to know people like that.”

M: Can you talk a little about your life and how your life experience may have influenced you to become a poet?

JG: Well, I come from a Russian speaking family and Russians highly regard poetry as do many cultures of Eastern Europe. By the time I was 15 years old I had read the entire canon of Russian fiction and the great poets in translation. Sometimes my mother, Olga, would read in the original. Around that time, my family moved from rural California to NYC. It was the era (1965) of folk singers like Joan Baez, Bob Dylan, Pete Seeger and Americana classics drawn from what folklorist Harry Smith would come to call “Old Weird America”; the backroads of wild America. So, I became very interested in the poetics of witness, whether song or poems. Bob Dylan’s “A Hard Rain is Gonna Fall” about nuclear fall-out written in 1962 still sends shivers in every cell of my body:

Anyone can watch on YouTube when he received the Noble Prize For Literature in 2016 sung by the poet Patti Smith.

M: Who have been some great influences in your life regarding poetry?

JG: It was really the Beat poets that spoke to me as a teen, especially Ginsberg with his poem Kaddish  about his mother, which just inspired me to the magic of language as heightened emotion to wake one to the sorrows of life mitigated by this particular combination of sound, meaning and affect which might arise as a non-conceptual naked moment.  What Trungpa Rinpoche would come to call Mahamudra (the great symbol) not of something other but the present. As a girl I sensed the magnitude of this vocation.

And so I began visiting St. Marks Place, one of the great poetry venues of the era in the East Village, NYC much to my parents’ chagrin because it was a quite dangerous and drug infested neighborhood in the 60’s. But then I became exposed to a whole generation of living poets  including Russians like Yevtushenko whom I heard read live his masterpiece Babi Yar so relevant today. (The first monument bombed by the Russians in the current conflict).

Later when I was an adult, Trungpa Rinpoche and the Naropa poetry school were influential. It also meant a lot to me upon meeting Trungpa Rinpoche for the first time – he kept repeating the word “poetics” although I came to do graduate studies in Buddhism. Other Lamas also called me a poet so I began to take it more seriously, not just as a private endeavor.

M: Also can you talk a little about your life and poetry and how that might have brought you to Rinpoche and the Teachings or vice versa? How did you first encounter Rinpoche and Dzogchen?

JG: I would say, that Rinpoche brought me to a more transcendent poetry. He was so remarkable in his communication openness and a poet himself who experimented with more contemporary forms. He had thousands of students and yet  he always thanked me for poems I sent him or Rosa beginning decades ago. I found within aspects of his Santi Maha Sangha gems of great beauty. Mostly, my work in the Dzogchen Community was administrative with poetry taking a back seat. But every year, I wrote a Losar poem based on my spontaneous projections and posted on Norbunet and The Mirror which people seemed to appreciate. I was hoping to finish all 60 of the astrological cycle, which I don’t think is now possible but I can’t seem to let go of it each year as long as I am alive.

Aside from Rinpoche himself, I would have to say that my slow development as a practitioner of Dzogchen as taught by him (and other Masters too) began to seep into my work to the point I now emulate the old cave yogis writing my mind which I call Composed in the Tongue (following Trungpa’s advice to Ginsberg).

M: How is poetry related to and/or how does poetry affect your life experience?

JG: Right now it is my everything. Oddly being on Chemo for a recurrence of a previous cancer has opened up a whole world of relaxation where..Sort of the Zen notion of eat, sleep, and chop wood (the poetrymind version) is the presence of nowness due to less distraction and more effortlessness as in low energy. So that might be the silver lining of stepping closer to one’s mortality.  Do Nothing!

M: How do you see the value of poetry for a practitioner?

JG: Since the time of the Buddha (and before in the great Hindu writings or the thousand year old Cold Mountain poems of China and numerous other wisdom traditions like the Psalms of David from the Hebrew and so forth) that are still ALIVE, the narrative songs of the nuns and monks during the Buddha’s time and later, through the great Mahayana literature, the Tantric Mahasiddhas, and Dakas and Dakinis from other realms recorded their pith Teachings or narratives. It is an aspect of humanity that is collective in nature.

While language is defined as provisional (the finger) pointing to the moon (not the moon) in Buddhist hermeneutics – those on a Spiritual journey never stop expressing or writing their minds. In other words, we just can’t seem to shut up about the nature of mind and reality beginning with that slight vibration of sound. But as the bard said – now your song well, don’t fake it.

M: Is there anything else you would like to say regarding the relationship of your art and the Teachings?

Oftentimes,  poets speak  for those who suffer and have no voice. Therefore, we serve the well-being of humanity….To forget the sorrows of this life is to live in ignorance. When connected to the Teachings or “Big Mind” such labor is for love and beyond ego or personal reference. But then we all are trained to do this given whatever we do while integrating with the view of the Dzogchen Teachings or other Wisdom contexts.  It’s no big deal. That’s what I learned from my main poetry guru, Allen Ginsberg.

M: Thank you very much Jacqueline for your time and your poetry.

Jacqueline Gens is working on a website called Language in the Sky which will offer a number of  features as a virtual home for poet practitioners. The next round of events will focus on the Poetry of Witness in collaboration with poet and Tibetan translator, Constance Wilkinson relevant to current events happening in the world now.

Stay tuned for an announcement shortly inviting the international Dzogchen Community to participate in a live zoom poetry reading on July 23, 2022 Dakini Day to bring our voices and different languages of wisdom together.