A photographic exhibition by Enrico Dell’Angelo 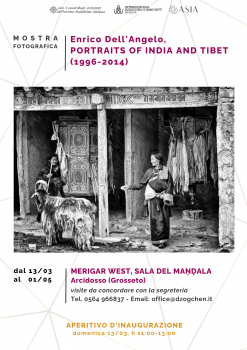 The exhibition is part of the activities of the “Seeds of Awareness” project, funded by the Italian Buddhist Union, which aims to enhance the socio-emotional abilities of young people to enable them to take part of the creation of a more inclusive and embracing society and to spread knowledge of the principles of awareness and of interdependence.

The project was realized by ASIA, Associazione per la Solidarietà Internazionale in Asia (Association for International Solidarity in Asia) and by Merigar, the Italian seat of the International Dzogchen Community.

The intent of the project, now more than ever, also due to the pandemic that has so severely struck our world, is to help young people to understand better their inner world in order to get in contact with what is happening inside them and to relate with others with empathy, by being aware of the interdependence that bonds all living beings together.

The aim of the exhibition is to help young people to meet and know the cultural and spiritual heritage of Tibet, because in the collective imagination Tibet is associated with peace, compassion and non-violence, thanks to the ceaseless work of His Holiness the XIV Dalai Lama, Tenzin Gyatso, holder of the Nobel peace prize. This honour was bestowed on him in recognition of his commitment for the promotion of a spirit of tolerance and collaboration among all the peoples of the earth and of the plea to consider with greater and more concrete attention the legitimate demands of the Tibetan people for their right to self-determination. 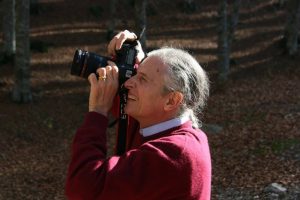 The 49 photos presented were taken by Enrico during his stay in Tibet between 1996 and 2010 and during his last trip to India in 2014. Mostly in black and white, we found them among his papers, and are part of a far vaster archive. The photos here are only those which he himself selected, curated and printed in person. They are images of landscapes in Tibet, of people he met during his travels while overseeing development and emergency projects, portraits of his spiritual masters, of wandering yogin, of women and men, of the elderly and of children he used to stop and talk to.

Enrico knew how, through the attentiveness and presence that characterised him, to capture their smiles, glances and share moments of familiarity. The smiling gentleness of his approach immediately won much trust in the people he met, allowing him to get near to and snap pictures without any trouble, immediately creating a relationship with those he photographed, easily overcoming any mistrust that separates people coming from different cultures.

Enrico was an integral part of Tibetan culture and spirituality, completely immersed in the landscapes and people, and he wanted to leave us a testimony of a world which, regrettably, under the ceaseless and ruthless Chinese oppression, risks disappearing forever.

This photo was taken by my uncle Enrico. When I look at it I have no idea who the subject is, when or where it was taken. In Tibet, but in what place or situation, I wouldn’t know. I don’t know if Enrico and this person knew each other, if they were friends or had just met. Enrico often photographed people he didn’t know, but before taking the picture he always sought and waited for the person to look over, to smile or to nod their consent to his or her picture being taken. I never saw him steal a portrait, but I did often see him capture flashing moments that he then fixed in a dimension beyond time.

You can see his vigilant presence in many of his photos.

Once in the subway in New York I watched how he could enter other peoples’ space that he then photographed. In reality it was often actually the others who did this, maybe caught on his hook. He had a Leica with a coloured lanyard that caught the attention of vastly different subjects.

His prompt quips and skill in making compliments, that were never over the top because always light-hearted, just like his ability to tease but never offend because he was always a bit flattering, was another of his great gifts that proved useful when following the advice of the celebrated Robert Capa. 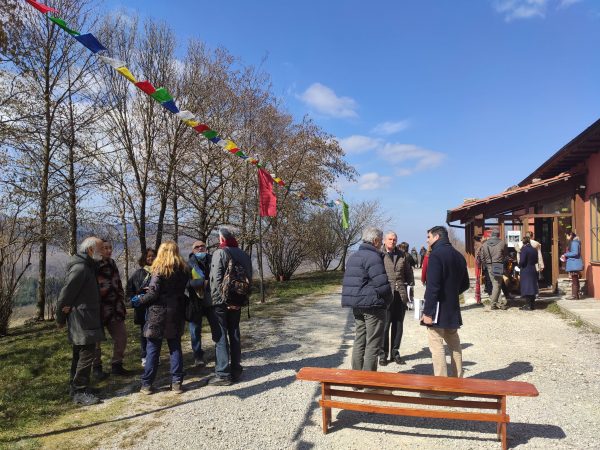 In the last days of his life, in hospital, my Uncle’s favourite pastime was to walk along the corridors with his drip-feed stuck to his arm, meeting people. In next to no time he had become someone liked by everybody, patients, nurses and doctors alike. It was Enrico who seemed to be the doctor, always ready with words of encouragement and support for every situation, also for the people who really would have wanted to be the ones to encourage him.

I’m coming to believe that this ability to get close to others enabled him to overcome the distinction between self and others, or maybe the other way around.

Biographical note on the author 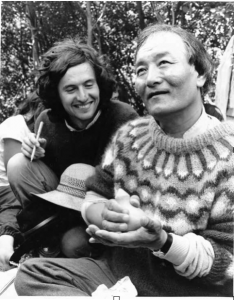 Enrico was born in Rome on 11th September 1954. In 1976 he met Chögyal Namkhai Norbu, a great Dzogchen Master, Professor of Tibetan and Mongolian Language and Literature at the Orientale University of Naples. To attend his lessons Enrico moved to Naples and graduated in 1982 in Tibetan language and literature writing his thesis on “The magical offering of the universe: a study of the Bon teaching of gShen rab Mi bo”, based

on the translation of the Srid pa spyi mdo, a very ancient ritual text of the Bonpo tradition. To do his research on the ancient Bon tradition he went to India in 1980, staying a year studying under Yongdzin Tenzin Namdak Rinpoche, one of the greatest contemporary Tibetan masters, founder of the Bonpo Community in Dolanji and of Triten Norbutse Monastery in Kathmandu.

In 1988 Enrico travelled to Tibet, on pilgrimage to Mount Kailash and to do further research on the ancient Bon kingdom of Shang Shung in western Tibet. In 1988, together with Chögyal Namkhai Norbu he helped found ASIA NGO for the preservation of the historical and cultural heritage and the identity of the peoples of the Asian continent, with particular attention to Tibet and the Himalayan area. In 1989, he was among the founders of the Shang Shung International Institute of Tibetan Studies, serving as its general secretary until 1996, the year in which he left for Lhasa to serve as Humanitarian Project Manager of the CISP NGO for which he worked until 1998. From 1998 to 2001 he ran the emergency projects of ASIA NGO in the prefecture of Ngari, Nagchu in west Tibet and in Qinghai, to help nomads struck by natural calamities caused by climate change. In 2002 he was hired by Trace Foundation, first as Programme Manager of the projects in Tibet and then as Executive Director of the Foundation. In 2010 he left Tibet, where he had lived almost uninterruptedly for over 14 years and then moved to New York, where he worked for the Trace Foundation until 2012. On returning to Italy he dedicated his time to the organization and constitution of the International Dzogchen Community at which he worked until his premature death in Rome on 26th December 2016.

Enrico was a passionate Tibetologist, with profound knowledge of the language and culture of Tibet, fluently speaking several Tibetan dialects. He was a great photographer and an enthusiastic expert in international co-operation. He dedicated his whole life to the preservation of Tibetan culture.