This year the Shang Shung Institute in Russia turns 5 years. On this occasion, we decided to talk to the Institute’s board members — Kirill Shilov and Vladimir Belyaev. They told The Mirror how the Institute and the School of Tibetan Medicine appeared in Russia, how it all developed, and shared their plans for the future.

The Mirror: Kirill, how did the Institute’s activity start in Russia?

Kirill Shilov: At the beginning of the 90s interested people in Russia started to translate Rinpoche’s books into Russian. In fact, this was even before Chögyal Namkhai Norbu first came to Russia in 1992 and established the first five Russian lings of the Dzogchen Community. At some point, as the Russian Community became stronger, this translation activity started to be coordinated by the Community and Rinpoche’s students formed different editorial groups which later became the publishing house. It was not yet called Shang Shung Publications, but in fact it was: we were publishing many books — both for the general public and practice materials for the Dzogchen Community – and we were really inspired by the work of our Teacher and his continuous dedication to Tibetan culture.

Classes at the school of Tibetan medicine.

M: Which projects is the Russian Institute working on now?

We started four years ago with the first group of students, around 60 people. And now the last trimester of the 4-year program is over, and those students, who managed to go through all the difficulties, passed their final exam. It means that now we have more that 30 new Tibetan doctors in Russia, thanks to Dr. Phuntsog Wangmo who has been doing an absolutely fantastic job all these years! Next year our students will go to China to practice and then they will receive their final diplomas. 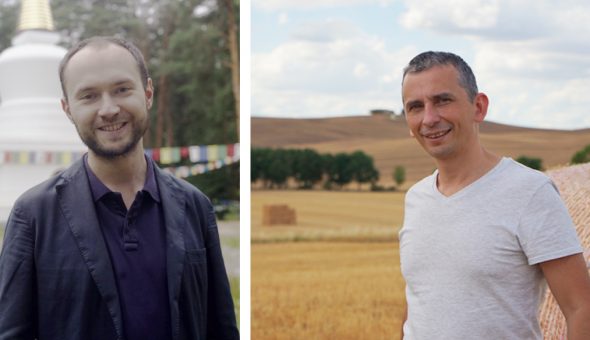 M: Can you give us some more details about the School of Tibetan Medicine in Russia?

Vladimir Belyaev: The decision made by Rinpoche during the retreat on the Dark Garuda in 2012 in Kunsangar North became a milestone in the process of establishing the school. As Kirill already mentioned, there Rinpoche announced that he wanted to develop Tibetan Medicine in Kunsangar North, that there would be a School of Tibetan Medicine in Russia, and that the classes with a 4 year basic educational program would start in May 2013. During that retreat Rinpoche once again highlighted the importance of preserving the unique knowledge contained in Tibetan culture and medicine which may greatly benefit all beings. He added that since the beginning of Kunsangar he had had a clear idea that Tibetan medicine and culture would develop here but the circumstances hadn’t been right for many years.

The School of Tibetan Medicine is an international project. It has two branches. The first was opened in the USA in 2005 and by now they have already had several graduations of students who have done the full training program, including medical practice in Tibet. Education in the Russian and American schools is carried out according to a program corresponding to the traditional educational program on Tibetan medicine approved in modern Tibet, and is based on the uninterrupted lineage of transmission which has been upheld by Tibetan doctors and scholars for thousands of years. 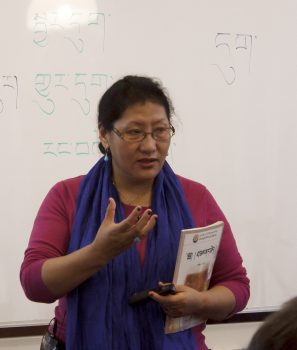 Dr. Phuntsog Wangmo, international director and teacher of the School of Tibetan Medicine.

M: Vladimir, can you tell us about Dr. Phuntsog Wangmo and the first graduation of her Russian students?

V.B.: Doctor Phuntsog is an extraordinary doctor, scholar and practitioner. She is really dedicated to Rinpoche and fully engages in the realization of the projects which he has entrusted to her. It really inspires and helps to move forward and resolve complicated tasks. It’s a blessing to be able to be next to her and collaborate and work together. Thanks to her knowledge, boundless compassion and wisdom we were able to realize such a painstaking project as the School of Tibetan Medicine. She is a completely unique teacher, a real knowledge holder. I think our students can tell you very well about this. You can find more details of her biography on the Institute’s web-page. 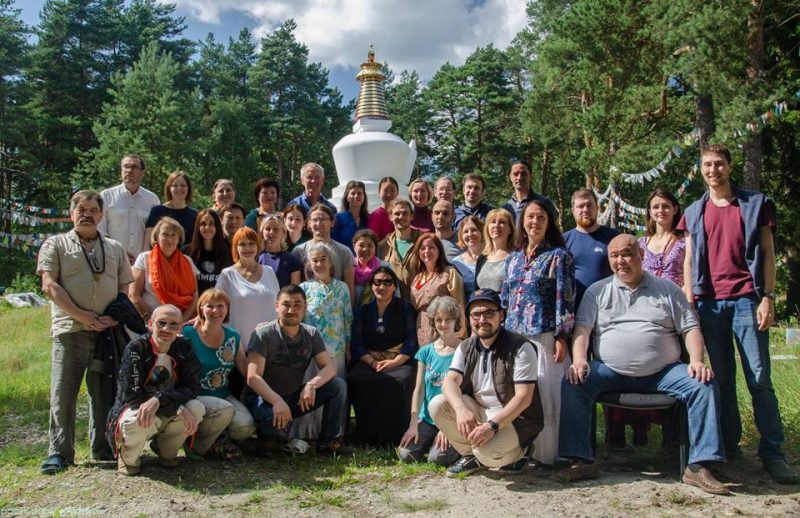 First graduates at the School of Tibetan Medicine in Russia.

The first graduates of the school are a wonderful and varied group of students, both in age, in life and professional experience. Some of them have had a Western medical education, others have been studying Tibetan medicine for many years, while others came to study from the ground up. Now 34 students have graduated. They manifested great perseverance and patience, studied a lot, learned the theory and the practice, and, at the same time, trained to hold consultations under Dr. Phuntsog’s guidance.

I would like to thank many of them for the assistance they provided for many organizational issues. There were a lot of tasks, but the students, in spite of being very busy, were always ready to help. This is something precious and instills confidence. The students are the school’s future and I hope that all of them will become safe pillars for the development of Tibetan medicine projects in Russia and the world.

M.: What are the school’s plans for the future? And what are, in general, the perspectives of the Institute’s development in Russia?

V.B.: As for the school and its educational system, moving in line with the modern life style and the development of technologies, as well as considering the great outstretch of our country and difficulties with constant residence in Kunsangar North, Moscow district, and at the same time taking into account people’s great desire to study this knowledge about health, we decided to modify the program a little.

Now we are preparing to transfer to a part-time educational system, with most of the theory being taught long distance according to high-quality video recordings made beforehand and translated into Russian. Practical knowledge will be transmitted during 2-3 week intensive courses, held once a semester, which will be organized at the base of our educational center in Kunsangar North. During onsite classes there will be clarifications on theory and at the end of the semester there will be an onsite examination. Each group of students will have their own adviser — the teacher’s assistants who will be designated by Dr. Phuntsog from her students. They will help to follow the materials, organise homework and answer questions during weekly online meetings. 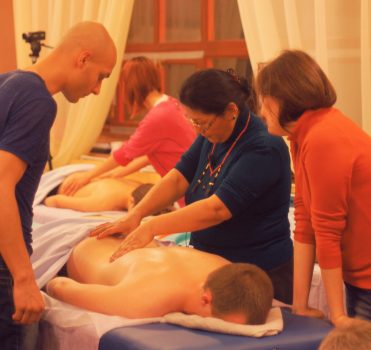 Practice of Kunye massage at the School of Tibetan medicine.

In addition to the basic program we will continue open seminars on Ku-Nye massage, both basic and advanced. Such seminars turned out to be high in demand and useful. Now we have a wonderful group which reached the 2nd level Ku-Nye and plans to continue training. Also Dr.Phuntsog is going to conduct separate special courses for future teacher’s assistants and Ku-Nye instructors with the participation of some of her students.

We also plan to conduct different public seminars on separate modules of Tibetan medicine, like, for example, courses on Nutrition and Behavior, Hospice, Nursing in Tibetan Medicine, courses on astrology, pharmacology, Tibetan language, etc. In terms of the international SSI program we are working on elaboration of educational materials and books containing the full 4 year course, methodological materials for separate courses and seminars. And, of course, the school plans to continue collaboration with organizations which represent Western medicine, scientific organizations which deal with traditional medicine, to work on integration of Tibetan medicine in the modern world, and conduct public talks and conferences. In this regard, there is still a lot of hard work to do but it’s absolutely necessary. 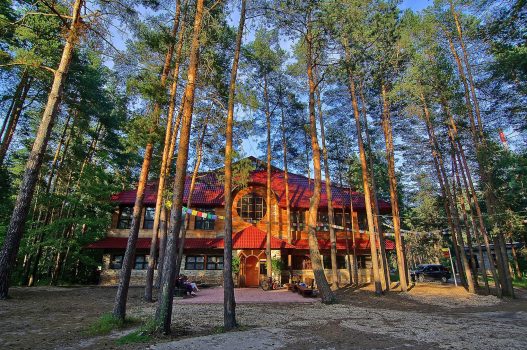 At the moment, the Shang Shung Institute in collaboration with the Gakyil of Kunsangar North is preparing the project of the clinic of Tibetan medicine in Kunsangar. We gave received the last instructions from Dr. Phuntsog regarding what there should be. At first it will be, let’s say, a basic clinic with necessary minimum of health-giving services. The students will be able to do their practice there and the graduates will be able to work. We also plan to open a consulting room of Tibetan medicine in Moscow.

K.S.: Regarding the perspectives of the Russian branch of the Institute, I would like to point out the uniqueness of our situation, in the sense that for many years, at least from the eighteenth century, a strong historical tradition of a very good connection with Tibet and the Tibetan culture has developed in Russia. This connection was made with the help of Mongolian, Buryat and Kalmyk people who live in Russia and many Russian scientists who actually started a very unique school of Tibetology and Buddhology in Russia in the nineteenth and twentieth centuries. That is why we, the Shang Shung Institute of Russia, aspire, among other things, to become a kind of a link between the tradition of Tibetan studies that we have in Russia and this live stream of knowledge we receive from our precious Teacher Chögyal Namkhai Norbu.

Among our priorities for the future is the development of the educational programs on the Tibetan language. Language is the heart of a culture, an environment that forms thinking, without which traditions and rituals lose their meaning and the objects of material culture becomes only artifacts. Particularly, for Buddhist and Dzogchen practitioners learning Tibetan helps to bring understanding of the Teaching to a completely different practical level — of course, given the essential knowledge has been received from the Teacher. Recently, I have noticed an actively increasing interest in the Tibetan language on the part of members of the Dzogchen Community, mostly thanks to the attention that Rinpoche gives to Tibetan songs and Khaita dances.

Another direction of the Shang Shung Institute’s development is creation of infrastructure for conducting courses, both public and those intended for DC members. As you know, in 2015 Chögyal Namkhai Norbu asked the International Shang Shung Foundation to take on responsibility for coordination of all public courses on Khaita, Yantra Yoga and Vajra Dance. At the moment, the International Shang Shung Foundation is elaborating the educational platform called Shedra (tib. བཤད་གྲྭ, bshad grwa — “place of study”) which will become an Internet-portal for organization of online and onsite courses guided by the instructors of the Dzogchen Community and teachers of the Shang Shung Institute. Our goal is to facilitate the organization of the courses, making it more effective, and create a unique system of certification, both for students and teachers.

M: In what ways can people collaborate with the Institute and the School of Tibetan medicine?

V.B.: The School of Tibetan Medicine is, in the first place, Chögyal Namkhai Norbu’s project academically directed by Dr. Phuntsog Wangmo. This project, in its essence, is inseparable from the Dzogchen Community. We are open for collaboration. Our work would be impossible without the support of the Sangha, concerned specialists of the Dzogchen Community in different areas who from the very beginning of the school’s creation have tried to help and contribute to this project. Since we became a fully licensed organization providing educational services, the scope of work related to professional employees in the area of education has increased. This kind of assistance, more or less, is being performed by different specialists. But at anytime we may need additional help from Dzogchen Community specialists. Of course, all projects on Tibetan medicine need sponsors and volunteers. We invite everybody interested in the development of Tibetan medicine and who has got the necessary skills to collaborate. Get to know about our activity, become closer. We’ll be very happy!

For general questions and collaboration with the Shang Shung Institute and the School of Tibetan Medicine in Russia please write to: info@shangshunginstitute.ru.

Interview by Anastasia Eremenko
Photos by Yulia Mikheykina, Lesya Cherenkova and others.