May all beings unceasingly hear
the sound of Dharma
from all the birds, from every tree, from the rays of light
and from the sky.
(Shantideva)

Just as a crow that flies from a sail
Returns to it after circling and soaring,
So a passionate mind that pursues the trail of thought
Returns to the primordial purity of mind.
(Saraha) 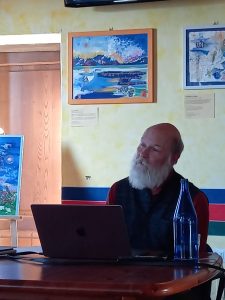 On Sunday, September 4, as part of the Library Talks series at Merigar, Fabian Sanders gave an explanation of the symbolism of birds in the Buddhist world and in the Tibetan imagination. Birds were the main theme of the 2022 edition of Library Talks. The idea was inspired above all by the interest that Master Chögyal Namkhai Norbu had always shown for birds and their songs. Particularly when he was at his home in Gadeling near Merigar, the Master loved to listen to the birdsong that filled the valley early in the morning.

In their varied forms, birds play a very important role in Buddhist literature and symbolism. In general, in addition to their symbolic value, that varies according to the species, their movement in the sky without leaving a trace gives rise to many parallels and is a source of powerful metaphors. In addition, an unintentionally divinatory significance is traditionally given to their behavior.

There is very strong symbolism attached to some birds due to their appearance and comportment. During the talk Fabian spoke extensively about the crow, whose black color gives the idea of a predominantly inauspicious symbolism, but which also has a link with the protector Mahakala, of which there is a form with the face of a raven, and with Rahula, also considered a demon of the eclipse, with a crow’s head on top of its stack of heads. The vulture, on the other hand, which is disliked in the West, is highly appreciated in Buddhism both for its characteristic of not taking lives to feed itself, since it only feeds on dead beings, and because it is said that it does not differentiate what it eats, which makes it a symbol of ro ​​snyoms, the single flavor that a practitioner should recognize in the face of any “meal” that samsara presents. Furthermore, the vulture is considered to fly higher than all birds. Its feathers are widely used; for example, they adorn the headdress of Padmasambhava, and it is said that they spontaneously grew on the head of Rigdzin Godemcen (1337-1409), teacher and tertön whose name means “he who has vulture feathers”.

In India and in Tibet, the cuckoo is closely connected to the arrival of spring and the awakening of nature, and thus represents awakening. However, its characteristic as a parasitic bird give rise to metaphors on the deceptiveness of the material world, since the “adoptive” mother who feeds its young, believing it to be her own, becomes like those who seek happiness in what is outside.

Regarding the peacock, the electric blue color of its neck is considered to derive from its ability to transform the venom of snakes, insects, and plants that it feeds on; thus, the practice of the great Peafowl (Mahamayuri) protects against both material and spiritual poisoning. The feathers of its tail, with the splendid colored, complete and luminous thigle, become the symbol of what is already perfect, without any alteration.

The swan is be able to separate milk that has been mixed with water, and thus symbolizes discriminating wisdom and appears in several episodes and texts related to the Buddha.

During the talk, some artistic works by Giorgio Dallorto relating to the theme of birds were exhibited.

The Song of the Cuckoo, acrylic on canvas 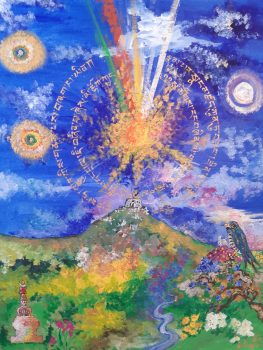 The painting shows the Six Verses of the Vajra, in Tibetan Rigpai Khujug (The Cuckoo of Instant Presence) in Tibetan uchen calligraphy. The verses are arranged in two concentric circles in the sky of Merigar; in the lower part of the picture is Monte Labbro, the Stupa of Merigar and, in the foreground, the Himalayan cuckoo.

The nature of phenomena is nondual,
But each one, in its own state, is beyond the limits of the mind.

There is no concept that can define the condition of “what is”
But vision nevertheless manifests: all is good.

Everything has already been accomplished, and so, having overcome the sickness of effort,
One finds oneself in the self-perfected state: this is contemplation.

The White Crane, acrylic on canvas 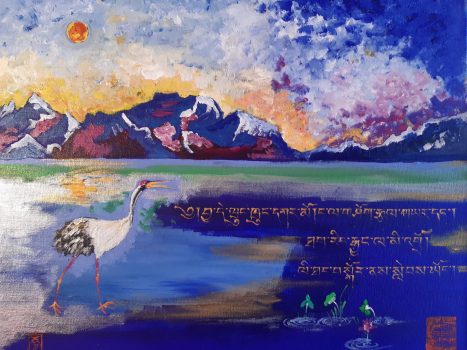 White crane!
Lend me your wings
I shall not fly far
From Lithang, I shall return.

The Crystal and the Feather, acrylic on Nepalese paper 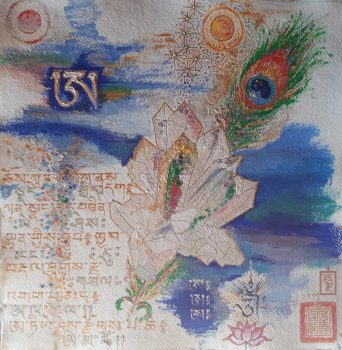 Verses taken from works by Chögyal Namkhai Norbu transcribed in Tibetan uchen calligraphy  concerning the three Wisdoms (essence, nature and potential) according to the Ati or Dzogchen teaching, accompanied by the crystal, symbol of primordial purity, and the peacock feather, symbol of self-perfection, which are also cornerstones of the Dzogchen teaching.

The essence of all phenomena is pure from the beginning.
The nature of all that appears is self-perfected.
The all-pervading potentiality is without interruption.
The wisdom of Ati is the total perfection.
A A A

All that appears and exists manifests in the condition of wisdom.
Marvellous! Wonderful!

This season’s previous Library Talks relating to the theme of birds and winged animals in general had a naturalistic character and were organized with the valuable help of experts from the GOM – Maremma Ornithological Group – “A. Ademollo” Naturalistic studies, a voluntary organization that carries out studies and research on fauna, flora and natural environments, especially the avifauna of the Province of Grosseto, also for conservation purposes.

The first Talk, on 8 July, had as its theme The birds of the area of ​​Monte Labbro and the upper Albegna valley with Luca Passalacqua of the GOM – Maremma Ornithological Group. On the occasion, the photographic exhibition In the skies of Merigar was also set up in the Mandala Room. The exhibition documented some of the varieties present in the area thanks to photos, all taken at Merigar, by photographers Giacomo Gentiluomo and Riccardo Sirna. Together with the photos, we prepared descriptive captions provided by the GOM which we combined with the songs of the birds that could be heard using the QR code. 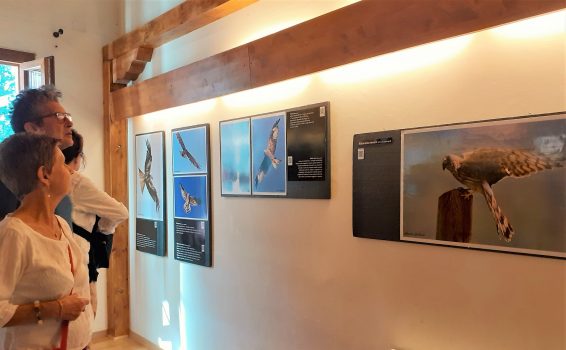 In the Skies of Merigar photo exhibition.

We discovered that from the observations carried out by the ornithologists there are probably about 160 bird species present in the Merigar area and in the surrounding areas, such as Mount Labbro and the nearby hills. In particular, the Merigar area is important from an ornithological point of view, especially due to the presence of species such as the harrier, which nests here, and passerines such as the red-backed shrike, which are decreasing in number in Italy. An interesting curiosity is also linked to the fact that, among the species present in the area, there are some that can be attributed to the main characters of the Buddhist text The teaching of birds, a work in which the cuckoo, a manifestation of Avalokiteśvara, transmits the teaching of Buddha to a winged people. 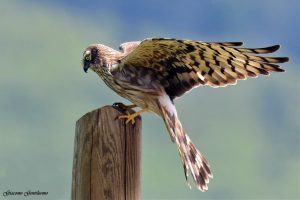 Luca introduced us to the different species present in the area and then led a walk along the footpath towards Arcidosso, identifying some of the species described together with the participants. 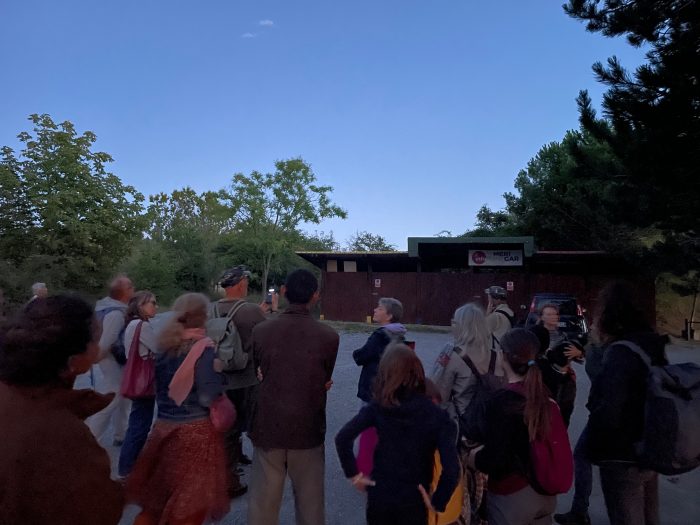 The second meeting with the GOM experts took us into the night skies, in search of the bats, the only flying mammals. It was extremely interesting to find out more about these very special beings and then walk in the dark with the expert Marco Dragonetti who, with his bat-detector, made the ultrasounds of bats in flight audible.

A short time later we received the analysis of the recordings, of which we present some excerpts:

“The species detected with the bat-detector are Pipistrellus kuhlii and Pipistrellus Pipistrellus, with a tendency towards the prevalence of the latter species. It is interesting to note that in many other areas of the province of Grosseto the opposite phenomenon is observed, with a clear prevalence of Pipistrellus kuhlii and, in some cases, a complete absence of the other species […] Given that the first records of both species were obtained at about 20.30, that is about 15 minutes after sunset, it is practically certain that those individuals came out of shelters present on site, probably in the crevices of some building at Merigar. […] Therefore, even if there is a relatively low number of individuals, the presence of some reproductive site of the two species mentioned above in the Merigar area can be considered reliable. In this regard, the possibility of conservation action should be considered, by arranging some artificial shelters (bat-boxes) in strategic positions, given that both Pipistrellus kuhlii and Pipistrellus Pipistrellus are habitual frequenters of this type of shelter, both for reproduction and for their autumn / winter rest. ”

The topic of birds will also be the main theme of the upcoming Library Talk entitled Where the birds sing: Haiku poetry encounter, an introduction to the poetic genre of haiku with reading of works in the original language and in translation with Paola Peruzzi and Jun Nakazawa. The guiding thread for the choice of the haiku presented will be that of the birds and, to follow, an experiment in writing and reading the compositions of the participants.

Library Talks is an initiative consisting of various cultural promotional events organized by Merigar both at its own facilities, in particular the Library, and in the Arcidosso Town Council Chamber or at the Castle. With very different themes, from the mind in Buddhism to Indian dance, passing through Tibetan poetry, the biographies of the masters, sacred places and many more topics, over recent years we have introduced Merigar, the library and some basic themes of the teaching to an increasing number of people, thus expanding and diversifying our cultural contribution in the area.