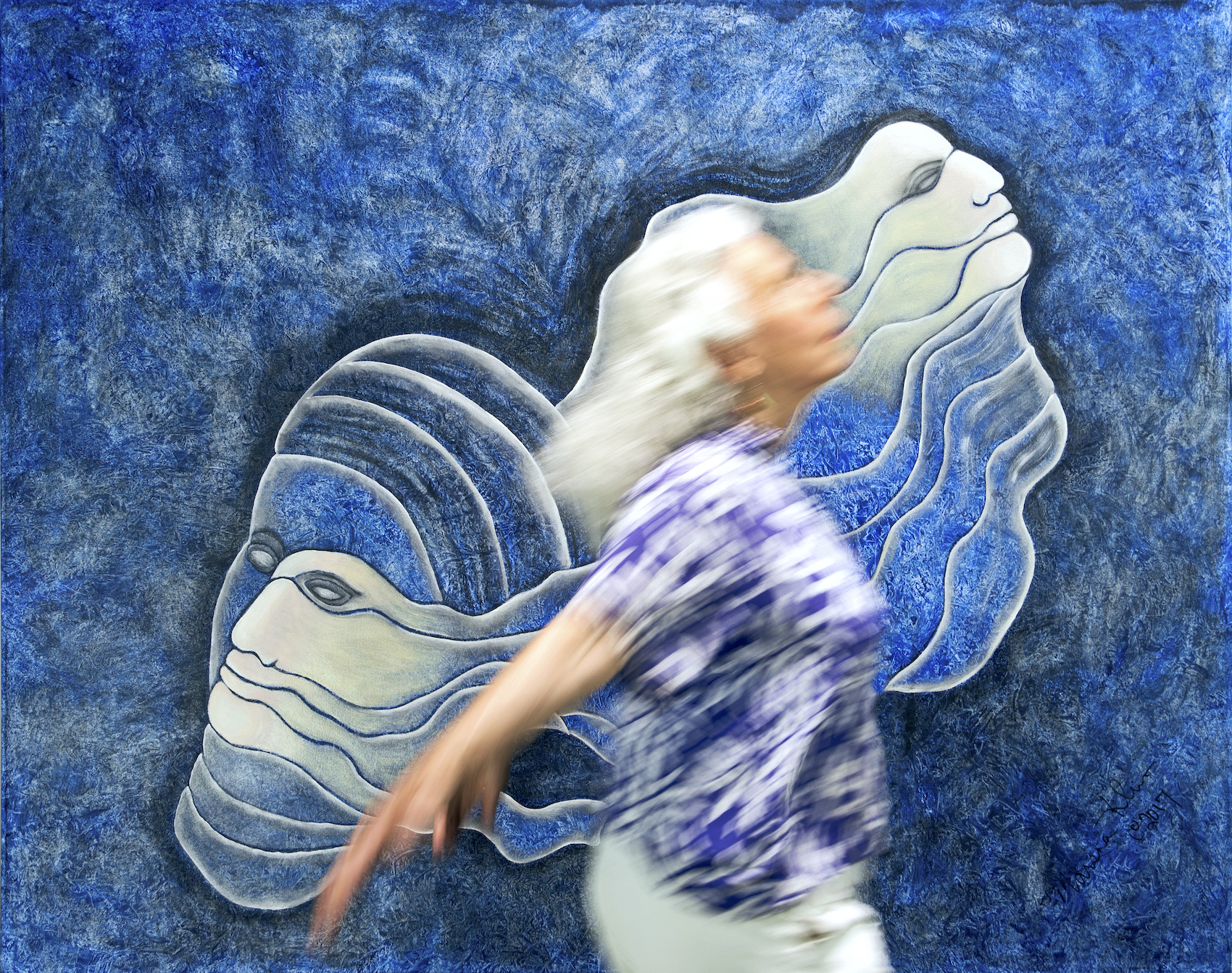 Marsha Klein with her Painting Dreamers #9.

I had the amazing good fortune to attend the first introductory retreat of the Dzogchen Community, in America in November 1979. It was held at the California Institute of Integral Studies, located in an old mansion, in the Haight Ashbury neighborhood of San Francisco. Norbu Rinpoche arrived that first night, with an entourage of Italians that immediately brought to mind, “La Dolce Vita.” Rinpoche himself, stunningly Tibetan, but dressed casually, teaching in Italian, translated by Barry Simmons, a brilliant scholar and a huge presence himself.

They began with the sangha singing the Song of the Vajra, and then Norbu Rinpoche giving an introduction to Dzogchen. The power and clarity of his teaching was so strong that I was transfixed. Although at the time I didn’t know Italian, I could somehow understand almost everything Rinpoche said, and then I got to hear it again, translated into English. He concluded with teaching us the practice of the night, la pratica della notte. As in many of his teachings over the years, this rang so deeply true to me, something I knew without having the words to ask for it. I had been an avid dreamer all of my life, and being in Jungian analysis, recorded many of my dreams, so working with dream life was completely familiar. I knew without question that I had met my root Guru.

This fortuitous meeting came about indirectly, through our first son, Turu. He was six at the time and he had become friends with a boy in his first grade class, Russell Weinberger, (a friendship that has lasted through their lives.) When I eventually met Russell’s mother, Lynn, for the first time, she and I began a long conversation, which also continued over forty-three years. We realized that we had a lot in common, being visual artists, spiritual practitioners and having mutual friends in Chogyam Trungpa’s community. 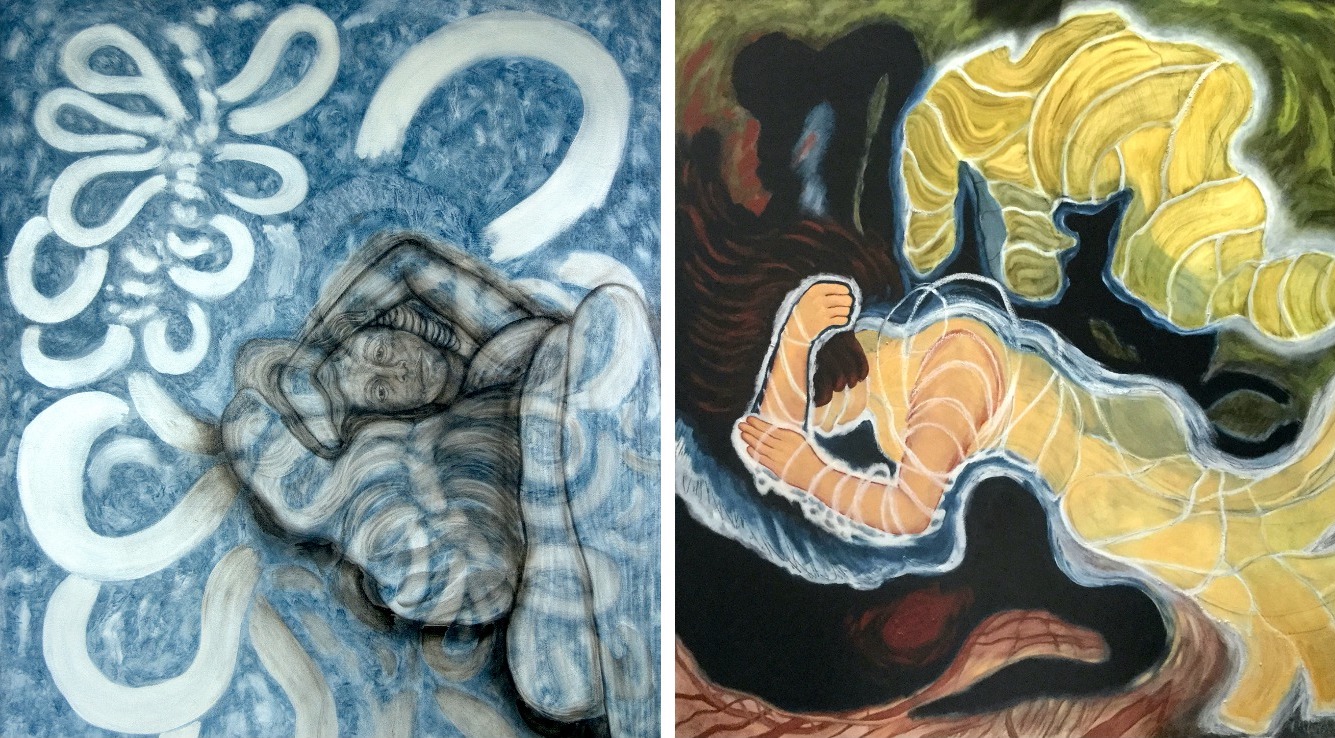 The Weinberger family had just moved to Sonoma that year, following twelve years living in India. Their time in India began with the Peace Corps and culminated at Tashi Jong, working with the monastery community and their cherished teacher, Khamtrul Rinpoche. Lynn and Jon had a deeply connected network of spiritual practitioners. Among them was the wonderfully vital Mario Maglietti, an early student of Norbu Rinpoche in Italy. When he heard that Rinpoche was planning a trip to our area, he let Lynn know, convinced that she should go meet him, and she extended the invitation to me and my husband, Charles. I feel that this connection came in good part because of the practice we had done up to that time, paving the way for this next step.

A few weeks after this first introduction, Kennard Lipman, an accomplished Tibetologist, as Norbu Rinpoche would call them, living in Berkeley and his then wife, Huisan, began reaching out to interested people. We gradually came together as a small community, with our first country retreat the following summer in Potter Valley. For every year following, well into the 1990s, we held annual summer retreats with Rinpoche, in various pastoral locations in Northern California.

Hearing and following his teachings, I felt like the dry earth drinking up every drop of water, a thirst quenched with the freshness and depth of it. At the retreats, he was always available, eating meals together with the sangha, giving three teachings each day, followed by the Rite and the Chöd into the night. There are so many memories from retreats here and globally: playing by the ocean, at the Oz retreat, watching him walking in the early morning, encountering a peacock who gave him the full rainbow of his feathered tail, soaking in the old baths at Harbin Hot Springs, swimming in the sea in Baja, where hot springs came up into the seawater. Seeing and helping paint the Merigar Gönpa with the master painter, Choegyal Rimpoche from Tashi Jong. Waiting in Kathmandu, for almost the whole three weeks that we were scheduled to have retreat, waiting for Norbu Rinpoche and the students to arrive. They were delayed and rerouted multiple times, but finally made it, coming back to share stories from their amazing journey in Tibet. Jim Raschick showed his slides and told the story of their finding the lost, ancient city of Zhang Zhung. 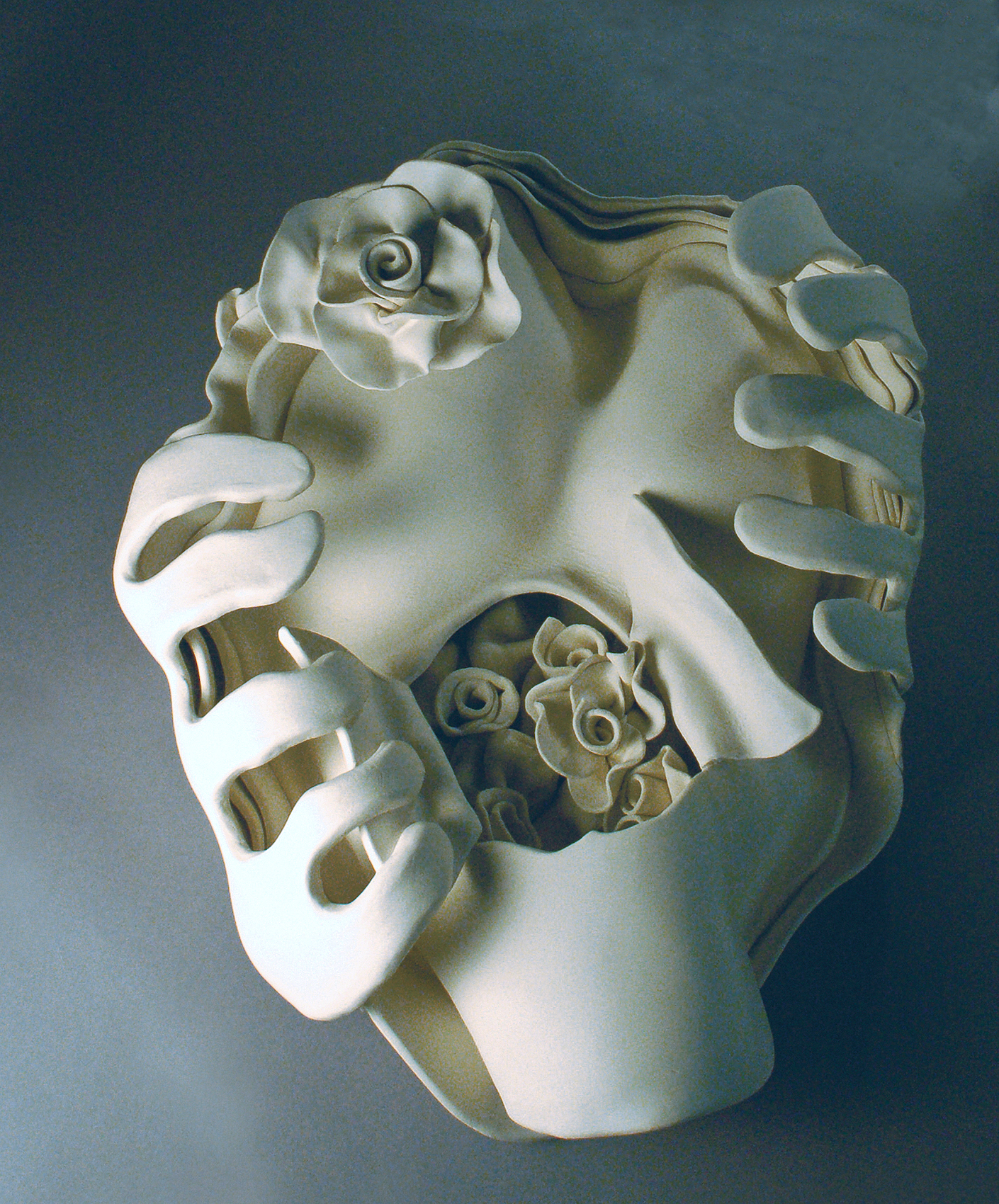 Since I was a child, my earliest memories are of my grandfather, and our strong connection. Meaning and understanding were always very important to me. Ancient traditions attracted me. Mystery, worlds we could only imagine, filled my mind. My Russian Jewish grandfather’s storytelling captivated and sustained me in 1950s dreary Williamsburg, Brooklyn. He instilled in me a belief in myself and my will to do anything I set my mind to

My passion for art began in my teens, when I discovered the art museums of my native New York City. Collections of Ancient Greek Sculpture and European Paintings at the Metropolitan Museum drew me in and Francis Bacon’s intensely expressive work at the Guggenheim jarred my vision into the present. I began studying art at Brooklyn College, but did the major part of my undergraduate work at the University of California, Berkeley, in the 1960s, at the peak of the Bay Area Figurative movement. My own artmaking was generated within this figurative tradition during a very exciting time, psychologically, spiritually and artistically, in the San Francisco Bay Area. In my early sculpture I responded literally to the Figurative emphasis on bodies in connection with nature. Surrealistically, my torsos, heads, arms, and feet, sprouted wings, flowers, cacti and roots. Ceramic sculpture was my main medium from 1969-1989. That year my father passed away and the Berlin Wall came down. The times signaled a switch in focus for me, from sculpture to painting.

Teaching art to children was my other calling, as a way to give them what I missed in my own childhood and for me to work directly with the raw creativity that is a child’s natural state. As I was discovering my own artist self in Berkeley, I attended a lecture at the San Francisco Art institute by Rhoda Kellogg, a Jungian psychologist and early childhood educator. This presentation of her international research on the universal quality of children’s creative development, confirmed my commitment to work with children through art. Which I did following graduation and on into forty years of my life. My teaching expanded to reach students of all ages, at first in clay and later drawing, then designing and directing large community mural projects.

In 1971, I moved from the city to the country. I fell in love with Charles Illgen and the land with which he had such a strong connection. I moved from Berkeley to join him at a three hundred acre ranch in the hills of Napa and then a few years later, to Sonoma Valley. In an agrarian setting, surrounded by nature, growing gardens, grapes, and then children, I developed a strong relationship with Charles and with nature. This appears in my artwork and in his surreal, photographic portraits, which reflect a propensity for the spiritual and a dialogue between us. 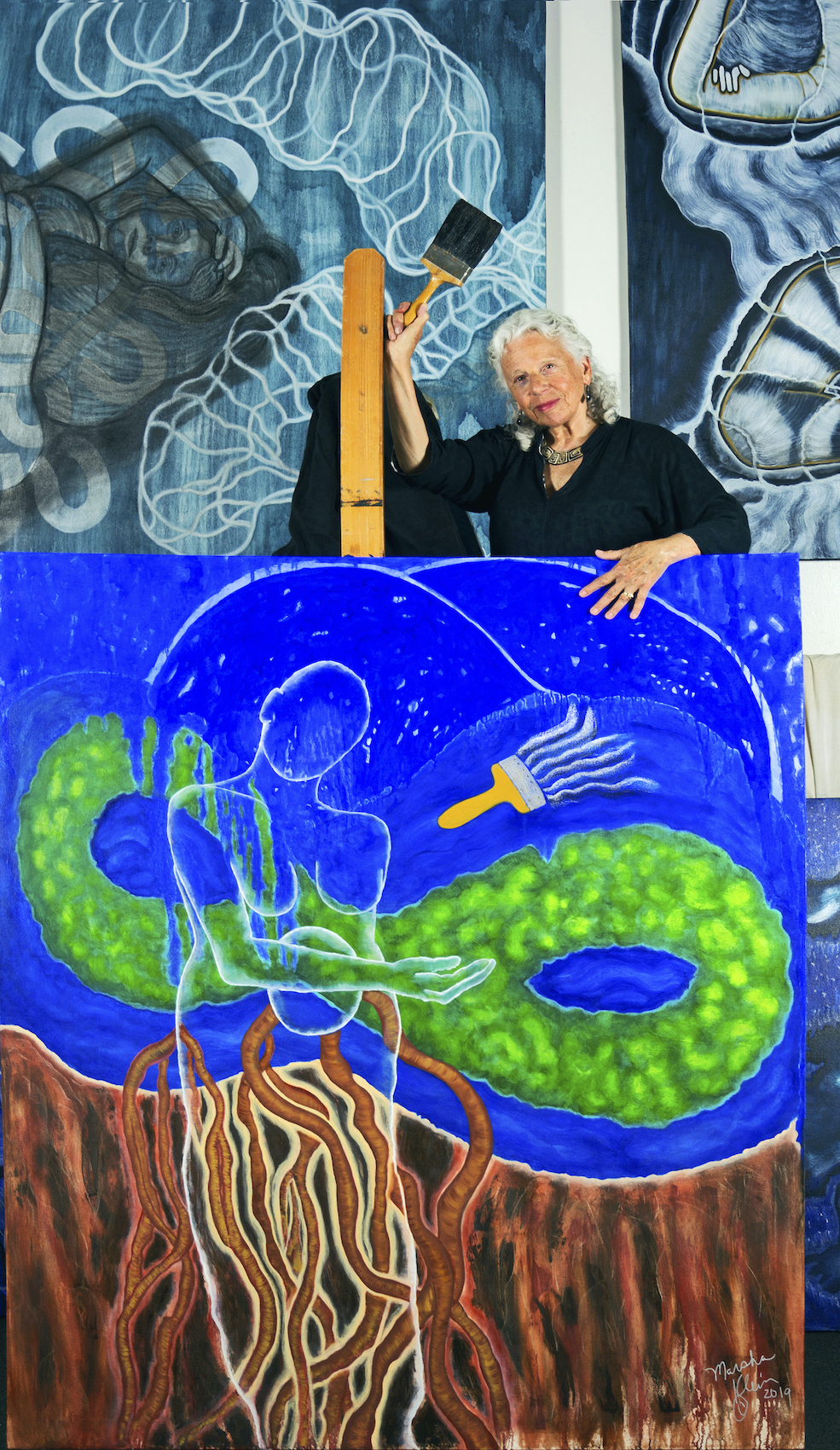 Marsha Klein with her painting Re-Membering.

My art as it has developed over these five decades is: Raw Vision, Dream, Symbol, Mystery and Soul Food. Art contains me as a sanctuary and a vehicle, providing me with the opportunity to develop a unique, visual language of my life’s experience. I create bold, expressive oil paintings and organic ceramic sculpture. Using the body as metaphor to address the human psyche, my work is rich in content with strong archetypal and biomorphic images.

Usually working in series, each piece captures a still moment in an unfolding progression. Recording a waking dream, I proceed intuitively. My raw approach often presents an unexpected, sometimes visionary result. As I explore seeming dualities: containment/expansion, hidden/visible, rooted/ transcendent, an internal plan reveals itself. Although my initiating impetus is often rooted in the personal, the completed works speak to the universal, reflecting larger concerns with the soul of humanity and our severely impacted natural environment.

During our retreats, Norbu Rinpoche gave us specific practices of integrating with the elements, water in the summer, fire in the autumn into winter, then air in the spring. These practices fit our country life with its creeks, fireplaces and hills. The elements are prevalent in my artwork as well. In fact, even the span of my art making practice visually and literally, follows the elements, moving from clay/earth and fire/heat, to water, then culminating with air/wind and my most recent, space/sky.

My art is a spiritual pursuit, transformative, in the making and in the viewing. It is a portal into a more connected, sensually and spiritually empowered self, offering viewers healing from the loss of connection to soul and to deeper meaning in our lives. These artworks definitely come through me. My art practice and my spiritual practice are interrelated. Dzogchen practice sustains, influences, enriches and informs my art work and my life.

To see more of my work, I invite you to visit my website: www.marshakleinstudio.com.