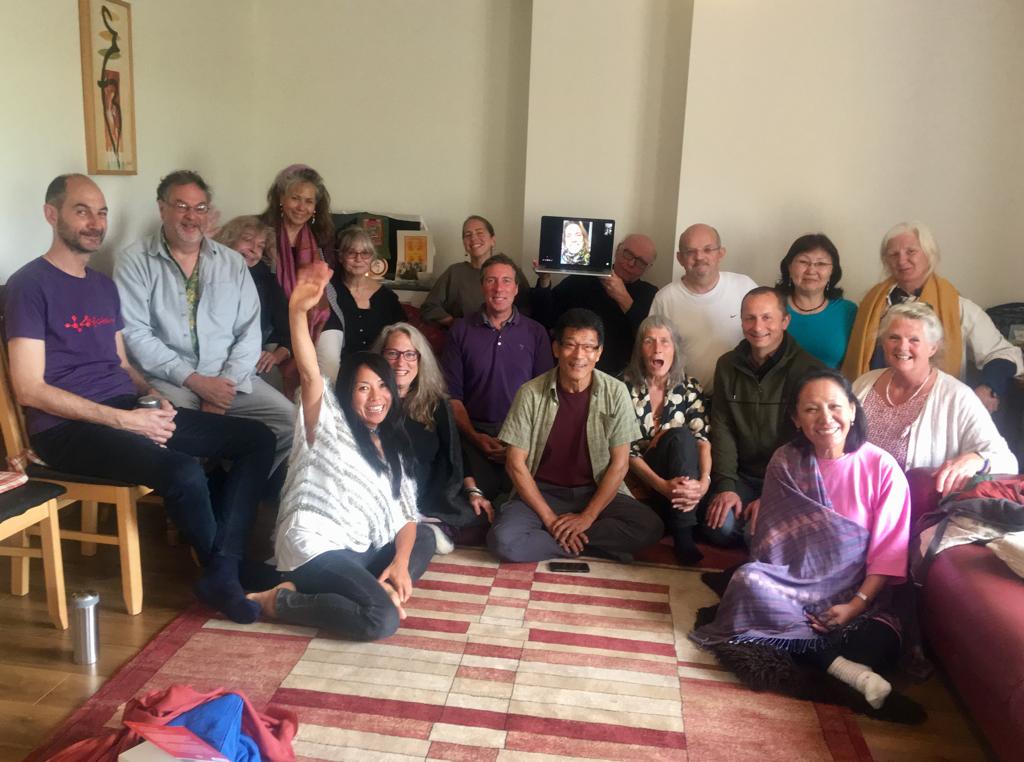 Inspired by the idea of practicing the green goddess on the emerald isle,
a group of us gathered from both the new world and the old and descended
on Marty’s Halfway House on the road from Castlebar to Westport in County
Mayo. We proceeded with a classic community mix of sitting practice
interspersed with Yantra Yoga, Khaita, Vajra Dance, food, drink and chat.

Various members volunteered to cook and our bellies were well-filled with
delicious meals from Euro-veggie to Yakult pancakes and Tibetan thukpa. The
space was held and supported by the charm and generosity of the natives,
in particular Anneli Watson, Tim Cabot and the inimitable Carisa O’Kelly,
who even brought a portable string Khalong mandala which, even though a
bit too big for our space with slight modifications, performed pretty
well.

The physical high point was a full-moon-day pilgrimage up the local holy
mountain Croagh Patrick (pron.“Crow Patrick”), a brisk 764 meters
scree-scramble into the clouds with beautiful views over the 366 islets of
Clew Bay and much more. Some of our knees may never recover and it was a
minor miracle no-one twisted an ankle, but everyone agreed it was a
wonderful day. We descended straight into a local pub for the pre-Ganapuja
of chowder, Irish Stew and Guinness, followed later by the official
version.

After several such probably-virtuous days we celebrated the final evening
in a local pub. Thuy and Rowan led us all in a rousing chorus of “Waltzing
Mathilda” and Sabra stunned us with “Java Blue” in French, all accompanied
by local fiddlers. We are sure the audience of locals and tourists will
never forget, as (never) will we!