In the summer of 1988 at Khyung Lung, not far from Mount Kailash in Eastern Tibet, Master Chögyal Namkhai Norbu had a dream of clarity about the remains of a chorten [stupa] from the time of Trenpa Namkha.

The following day, while they were filming the ruins of an ancient Bonpo monastery called Shang Shung, he identified the remains of the chorten he had dreamed about in a mound of earth. Just as in the dream, he found a hole in which he found a metallic object: an ancient metal garuda, a splendid thog chag. 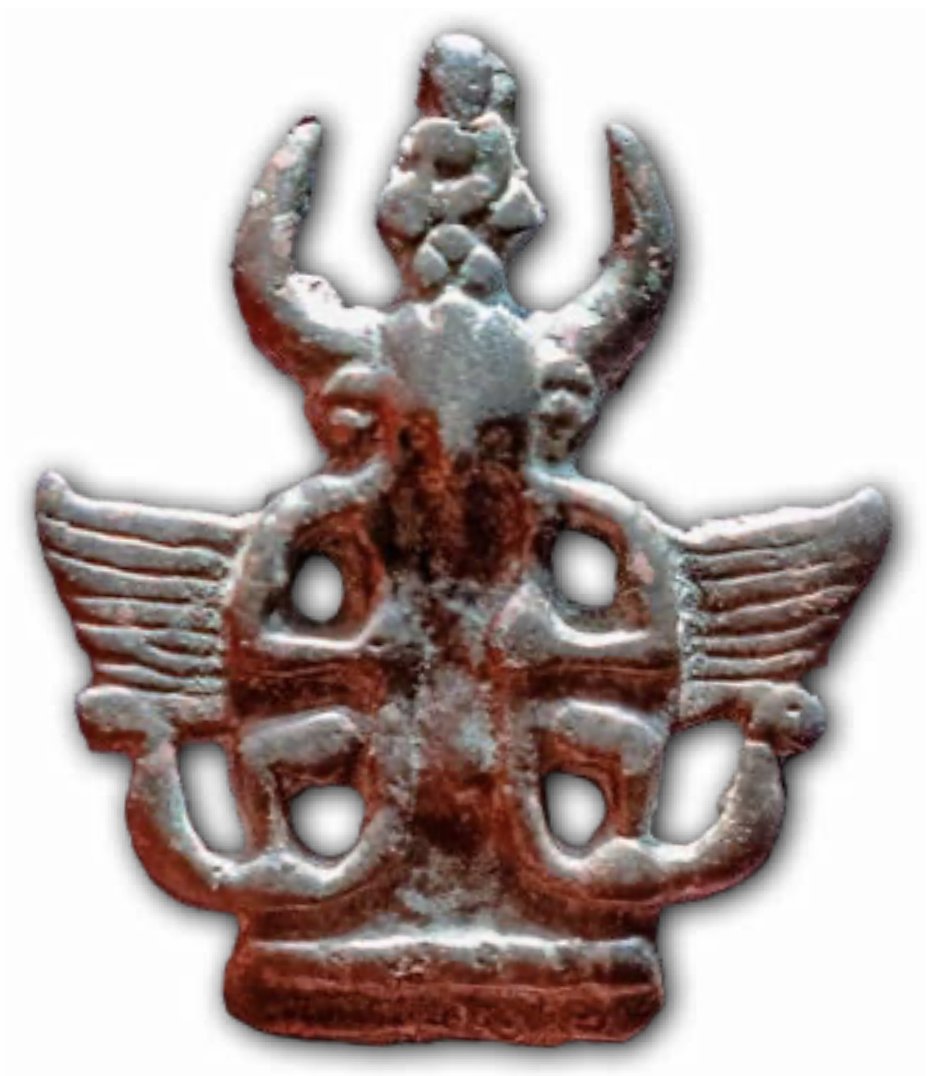 Thog chag are small metallic ornaments that have been forged in brass, in bronze, or in meteoritic metal. There are a great variety of models from different periods, starting with the Neolithic in the Bronze Age and going up to the Middle Ages. One can find similarities between thog chag and ornaments of various manufactures throughout the ancient cultures of the Central Asian Steppes.

Thog chag are small objects whose size varies from about 1 to 10 cm. Originally almost all of them were designed as amulets even if, in the course of time, as ancient metal handmade objects were found such as spoons, small mirrors, melong, arrow heads, pieces of antique armor, and so on, they also came to
be considered as thog chag.

The old thog chag were distinctive for their simplicity, uniqueness, and great originality, fruit of the splendid culture of ancient Tibet. They were made of a porous metal that was soft to the touch while being oily at the same time.

The Tibetans have always associated the realization of their desires with these small bronze ornaments. There is a legend that tells how the divinities transmuted their magical power into thunder, which they hurled with all their might into the bowels of the Earth, where this energy was transformed into metallic objects. According to the legend, in successive eras, these objects would emerge from the earth and those who wore them would be protected from thunder and the provocations of evil spirits.

In Tibetan the term “thog chag” is made up of two syllables (“thog” and “chag”); “thog” stands for “primordial” or “thunder”, while “chag” means “iron/metal” or something metallic. This explains the widespread belief among the Tibetans that these objects are linked to thunder and lightning. Most probably the word “thog chag” actually means “original metal”, a theory which is supported by the fact that various implements from the Stone Age were called “thog di” or “thog de” which means “primordial stone”. Hence thog chag were considered as “primordial” or prehistoric metal.

Evidently the Tibetans readily accept as thog chag certain small amulets that have been forged in copper alloys using prehistoric bronze. These should be distinguished from those in meteoritic iron called nam chag (gnam lcags), which literally means “iron fallen from the sky”. Iron fallen from the sky or nam chag is a ferrous type of metal which has been produced in the atmosphere by the power of wind and fire and is therefore a solid substance not extracted from the earth.

In the 7th century, Padmasambhava subjugated negative powers and local spirits transforming them into protectors of the Dharma. Dorje Legpa was one of these spirits who, once he had been transformed into damchen and had become a protector of the Dharma, had a specific duty to re-forge from pure sky metal objects of supernatural power that Padmasambhava would conceal as terma [hidden teachings]. Most thog chag, just like many statues of divinities forged in Tibet, are in brass or an alloy mainly composed of copper with zinc added.

In Tibet, thog chag are classified in eight categories on the basis of their color, which is the result of their metallic contents and varies according to the percentage of the different alloys. For example, the more gold there is in the alloy, the brighter the amulet will shine.

These eight categories, however, can be sub-divided into three classes according to the prevalence of bronze, brass or baitong. Baitong is an alloy composed of copper, nickel and zinc which gives a silvery hue due also to the continuous rubbing on the skin of the amulet’s owner.

The Tibetan terms which indicate copper alloys are: li mar (composed of li for “copper” and mar for “red”) and li kar (li for “copper” and kar for “clear”). In li kar, the alloy contains a good quantity of zinc for which reason it is similar to baitong.

Examining the three above-mentioned classes closely, we should consider that in order to be defined as such the bronze class must contain up to 20% tin. Tin is also used in an essential way in the fusion of bells and cymbals. Thus a great quantity of thog chag were created with the same metal as bells whose distinctive characteristics were a white hue and a ringing sound when they are left to fall on the ground. This sound is still often considered by Tibetans as an important criterion in verifying authenticity. The metal also gives the thog chag a therapeutic value because the skin absorbs the minerals that are necessary for the body’s requirements.

The most antique thog chag come from the pre-Buddhist era and represent an animal-shaped form that was typical of the ancient art of the Central Asian Steppes, with a symbolism that is explicitly shamanic. With the first spread of Buddhism, forms and images appeared that were strongly influenced by the Indian style with figures or symbols typically Buddhist: Vajrapani, Chenresig, bodhisattvas, mantras, vajras, shells, infinite knots, and so on.

The main animal-shaped icons are the eagle (khyung) and the lion, regal symbols par excellence in all traditions. Khyung is also the ancient Tibetan name for the garuda, which is called Shung in the language of Shang Shung.

At Khyung Lung or the Valley of the Garuda, near Lake Manasarovar, in the midst of a surreal lunar landscape, lies the main residence of Ligmincha, the last king of Shang Shung. It is called Khyunglung Ngulkar, the silver castle of the Khyung eagle. In both the ancient Bon and Buddhist traditions, the garuda is one of the most important divinities, which, in brief, symbolizes the power of the energy represented by the fire element.

And it was in the area of this ancient castle that Master Chögyal Namkhai Norbu found the thog chag in the form of a garuda, which, however, was mysteriously lost along with all his luggage during his return trip. Today all that remains of that garuda is an image in the film that was shot during those days at Khyung Lung.