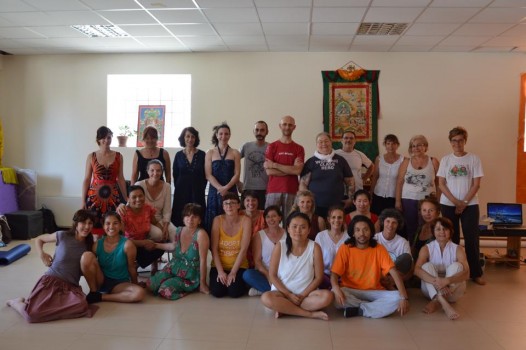 On June 7th and 8th for the very first time the spacious hall of Dribselling, the ling of Milan,Italy, inaugurated a few years ago, hosted a seminar of Tibetan modern dances led by our two Tibetan instructors, Tsedok Nyima and Topgyal Gontse, who had just arrived together with their charming little daughter from Estonia where they had taught dances to local practitioners and made a public performance as well.
Nearly  35 people joined the seminar even if some could only participate one day for work or family reasons. Students from nearby towns like Turin, Genoa and Brescia, Switzerland and Como  seized this opportunity to learn the dances repeatedly taught step by step by our kind patient and smiling Tibetan friends who started from scratch showing the basic foot and arms movements typical of several Tibetan dances. In the end the majority of participants managed to dance eight Tibetan songs which was quite a success considering that most of them either did not know them at all or just bits and pieces.
The atmosphere was really joyful and relaxed and in spite of the impressive warm spell affecting Milan, all the students enjoyed the exquisite ” momos ” prepared by Eliot Guarisco’ s wife and daughter soon after the Ganapuja at lunch time on Sunday. Tsedok and Topgyal were really wonderful and inspiring and they did their best to transmit their enthusiasm for the dances and their devotion to the Master who is working so hard to enable us to learn them, contributing to preserving Tibetan culture and at the same time bringing  about benefits to body, speech and mind as Rinpoche always emphasises. During the whole seminar people could also contribute to ASIA projects and buy some beautiful objects and fabrics exhibited on a stand set up in the hall  thanks to the inexhaustible energy of Antonella from Como.
The course was well organised thanks to the joined effort of the local Gakyil and their collaborators and all the students expressed their desire to participate in a follow up seminar which, as everybody suggested,  should take place as soon as possible,  hopefully in the coming months of October or November at the latest.