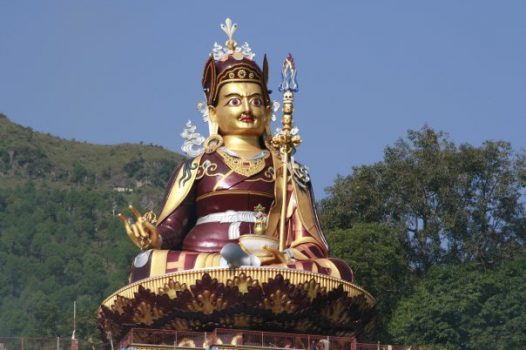 The enormous statue of Guru Rinpoche overlooking the lake

When I was asked to write an article for the Mirror, it was supposed to be about my pilgrimage in India, Nepal and Bhutan. As nothing really important happened during these months, I thought it might be more useful if I wrote a short history of Tso Pema and enumerated its most important holy places. I was also very fortunate to be in Tso Pema during the Guru Rinpoche Tsechu, a very important religious festival that is organized once every twelve years, for the Tibetan New Year of the Monkey. I suppose that most readers are already familiar with Guru Padmasambhava, or Guru Rinpoche, as most Tibetans call him, so I will focus on his enlightened activities in Tso Pema and the encounter with his predestined consort, Dakini Mandarava.

It is said that Guru Padmasambhava magically appeared in a lotus in the middle of a lake in the Buddhist Kingdom of Uddiyana. Even though some sceptics prefer to believe he had an actual mother and father, knowing how fantastic the rest of his life story is, I prefer to believe in the former because my self-conditioned mind likes miracles and magic. According to some sources he was born four years after the parinirvana of Buddha Shakyamuni, other sources state that he was born much later, sometime during the 8th century. In any case what most Buddhists agree on is that he was born on the tenth day of the sixth month of the Fire Monkey year, and that is why the Guru Rinpoche Tsechu festival is celebrated on the tenth day of the first month of every new Monkey Year. 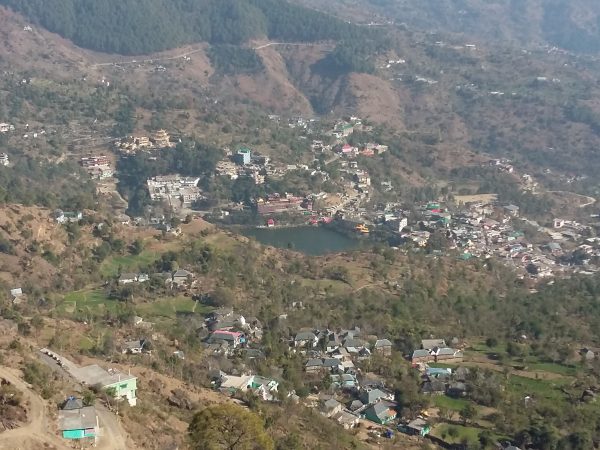 The kingdom to which the village of Rawalsar belonged was called The Kingdom of Zahor and its king’s name was Tsuk Lak Dzin. He was in need of a son, but when the queen gave birth to a daughter, even though there were many miraculous signs, like showers of flowers and celestial music heard by all the people in the kingdom, he wasn’t satisfied, as he needed a male heir.

The princess grew up very quickly and by the age of thirteen she was a fully-grown, beautiful woman. Many kings and princes from the surrounding countries made marriage proposals, but the king thought, that as she was his only daughter, it would be dangerous to have her marry one prince and have all the others as enemies because of that. Following the advice of his ministers, he asked the princess herself which prince she wanted to marry. She was terrified and begged her father for mercy, as the only thing she desired was to be a Dharma practitioner as a nun. Her father refused saying that there was no possibility for a female practitioner to have realization in one lifetime and that she should find a suitable spouse. The princess decided to flee from the palace out of desperation and scratched her face bloody, cut her hair and put dirty clothes on. Her parents sent out a search party and, once they had found her, decided to grant her wish to be a nun. They had her and her five hundred maids ordained as nuns.

Meanwhile, the great master of Uddiyana, Guru Padmasambhava, had seen that there was a suitable host for his teachings and decided to meet the nun-princess. Upon seeing him, the princess and the five hundred nuns offered their respects and gifts to him and the princess requested teachings, realizing that he was her root guru. Unfortunately a cow herder saw the whole scene and assumed that he was a lover of hers. As soon as the king and the queen were informed they went to see their daughter. When they arrived in front of the locked door of her chambers, they heard a male voice speak and this confirmed their doubts. They arrested their daughter and threw her into a pit-jail. As for her teacher, they decided to burn him alive. 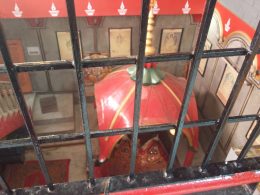 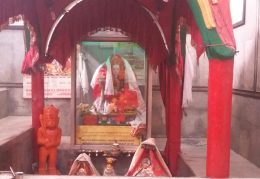 The king had his servants prepare a huge quantity of wood and oil, and putting Guru Padmasambhava in the middle, they set it afire. The fire blazed for one full week and it is said the black smoke covered the sky. After seeing the smoke had not faded, they realized that something was wrong, so they went there to see what had happened. They saw Guru Rinpoche, sitting in a relaxed manner on a giant lotus floating in the middle of a lake, surrounded by rainbow lights and hundreds of dakinis singing praises to him. Because he had integrated with the nature of the elements the fire couldn’t burn him and manifested as a beautiful lake, with a ring of fire still burning around it.

The king and all those present suddenly had very strong faith and repented for their negative actions towards such an enlightened being. The king offered his royal robes and ornaments and prostrated to the guru. He then brought him to the palace and seated him on the royal throne, attired as a king, and sent for his daughter, the princess Mandarava, who was to be liberated from the pit in which she had been held for a week. The princess refused to leave, saying that she had no desire to leave her jail. After, when the king, the queen and their ministers asked for her forgiveness and requested her to return to the palace, she finally accepted.

The king offered his entire kingdom and all riches to Guru Padmasambhava asking him to remain in Zahor and teach, benefiting all beings of that realm. It is said that the great Guru of Urgyen accepted to stay and remained there for a long time. 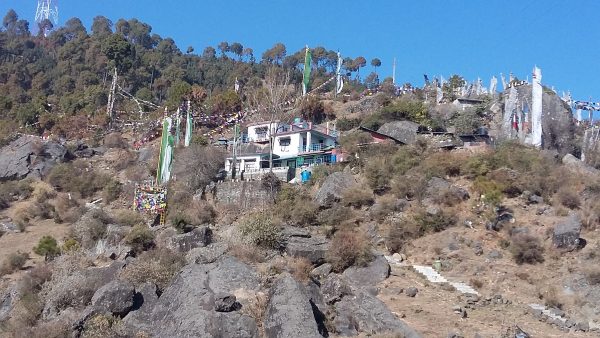 In the 1300 years that followed these events many masters, practitioners and lay people have visited Tso Pema and practiced there. There are, as a result, monasteries, temples, holy caves and special places there and in the city of Mandi, the ancient capital of the kingdom of Zahor.

I personally prefer quiet and solitary places so I will only describe caves and places I found suitable for personal practice.

The lake itself is holy and is considered to be an object of worship, just like a Stupa, which is why you can see hundreds of people walking clockwise around the lake, doing prostrations around it or doing practice on its shores.

A bit after the entrance to the lake, going clockwise, on the right side, there is a self-manifested Tara growing from a rock in a little shrine. I couldn’t see the precise shape of the deity, but there is definitely a Tam syllable in the middle of it.

At a certain point of the korwa, or the walk around the lake, on the west side of the lake there is one of the caves of Mandarava. It is necessary to obtain a permission from the old nun who takes care of that holy place if you wish to do practice inside. In general she is always very happy to oblige.

Around the lake there are monasteries of two important teachers. On the east side is the monastery of Ontrul Rinpoche, a very important Drukpa Kagyu master. On the west side is the Nyingma monastery of Wangdor Rinpoche, who has also recently built the gigantic statue of Guru Padmasambhava, just above the lake, from which you can see all of Tso Pema.

There are stairs that go up from the lake, past the statue of Guru Rinpoche and take you directly to the entrance to the cave-town, or retreat centre built around the three holy caves of Guru Padmasambhava and Dakini Mandarava. It is a 45-minute walk straight uphill. 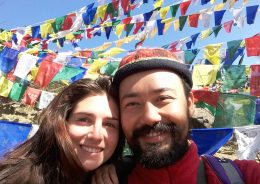 Cvetco and Tanita above the caves 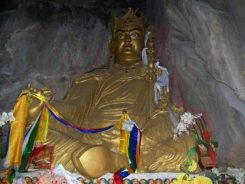 The first cave is when you take the white stairs and then turn right after 50 meters or so. It is the first door before the shrines and practitioners’ rooms, but in general there is always someone to show you the way. There is a main cave with a big statue of Guru Rinpoche and a smaller one behind it, with a statue of Dakini Mandarava.

Above these two is a hut built above the secret cave of Padmasambhava. It is a fabulous place for practice. When we say “holy cave”, it means these enlightened beings practiced in them and empowered them. Over the years, some important Tertons have discovered treasures, hidden teachings, in these caves. It is said that there are still some to be discovered there, and particularly the one in the secret cave of Padmasambhava, where you can see a strange circular rock formation in the wall on the left side, as soon as you enter the actual cave. 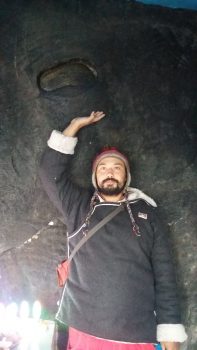 From there you can go uphill and pass through the lungta hill, where pilgrims hang their prayer flags and burn incense. If you go through (or around it) to the other side of the hill top, there are white marble stairs leading to a little hut where you can see a footprint of Padmasambhava in the rock, about two meters above the floor. It may seem strange for sceptics, but if you examine it yourself, you can see there is something strange about it. It seemed real to me, even though it was quite large. It is an excellent place for practice. Some people explain that there is a face print in a rock a bit further on, but frankly, I am not really convinced about the authenticity of this. Still, if you wish to see it, it is enough to ask someone and they will explain how to find it.

In Mandi, the first big town and ancient capital of the kingdom of Zahor, there are three important pilgrimage places. One is the actual prison-pit where Mandarava was held for a week. It is called Kuwa Rani in the local language. It doesn’t look like it used to, as it has been restored by local people for whom this place is an important temple, but it is truly a special place, even today.

Under the first bridge, an old bridge between Mandarava’s prison and the road by which busses come to Mandi from the west, is a cave of Tilopa. Tilopa was an Indian Mahasiddha and is famous for being the master of Naropa, who in his turn was the master of Marpa the Translator. Marpa is famous for being the root guru of the great saint Milarepa. Anyhow, Tilopa was an incredible master and practitioner and one of the caves where he practiced is in Mandi, under this old bridge, on the bank of a large river. Truly an uncontaminated place for practice where very few tourists go. A few meters away is the cave of Naropa, where he stayed in order to be close to his master and to be able to receive teachings from him.

The third place to visit in Mandi is called Tarna Mandir, and it is the place where Guru Rinpoche gave teachings after the events at Tso Pema. It is a very pleasant hilltop park above Mandi town. 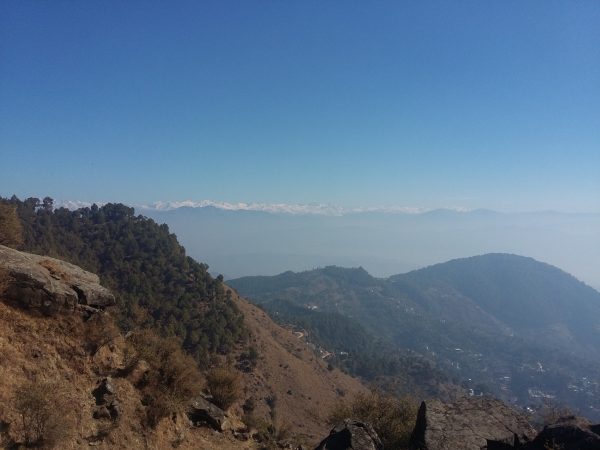 This sums up the important places of Tso Pema and Mandi, but there are other places, and to be honest, if a supreme practitioner could potentiate caves, transform fire into a lake and convert a whole country to Buddhism, I believe the whole zone where he spent some time is an excellent place for practice, for retreats and for simply relaxing in the natural beauty of the amazing sub-Himalayan landscape and nature.