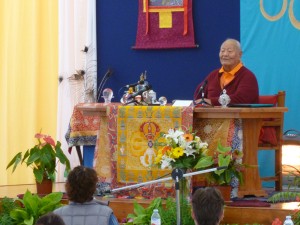 The Ati Yoga in Tenerife in January began under a clear blue sky, at times marred by gray but inoffensive clouds in the days that followed. Shortly after the end of the Khaita dances each day the sun sank into the blue sea giving us a breathtaking spectacle, illuminating the sea and sky with beautiful orange and golden hues.

By now many practitioners have been coming to Tenerife for several years, feeling just a little more at home in this little paradise with each visit. We live or spend time on the island with ease, now knowing the places to go shopping or where to sunbathe. After the teaching sessions we meet at the Delek cafe to eat, to chat and work on the computer. We feel that now the island is part of us, part of which we love as a second home where we go to follow the teachings and to escape a bit from the bitter cold of the north.

This retreat, held January 16 to 20, entitled “Introduction to the nature of the mind,” was essential and engrossing. The Master reiterated the fundamental concepts, inviting those who were present to ask themselves why they were there, then going on to explain the essence of the Dzogchen teaching with precise and measured words.

Every morning the session started with the practice of the A and the Song of the Vajra. The first session was an introduction with the Master explaining essential concepts useful for older practitioners to hear once again and very useful for the many new participants. Chögyal Namkhai Norbu then gave the lung of the short Tun and briefly explained the practice. The second day Rinpoche explained, with admirable precision, the different traditions of Tibetan Buddhism, important to know for anyone interested in teaching. On the third and fourth days he introduced the concepts of the base, the path and the fruit in each of the different traditions, from Sutra to Dzogchen as well as other basic elements of the teaching. 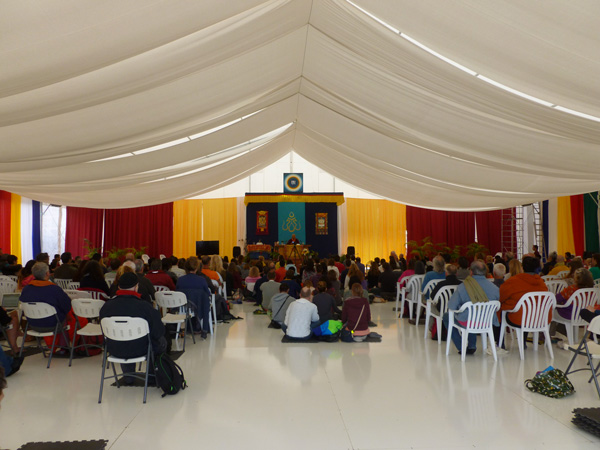 In the shadow of the big white tent you could follow the teaching dressed in light clothing, as the temperature was neither too hot nor too cold. At the end of each session, practitioners were able to enjoy the many pleasures of the island, from freshly caught fish to a tour of the impressive Teide volcano.

The retreats on the island of Tenerife are always a pleasant and refreshing experience. We are all looking forward to the Mandarava retreat in February where we hope many practitioners will have the opportunity to be present to enjoy the teachings of our Master and the beautiful sunsets that the Atlantic Ocean gives us.