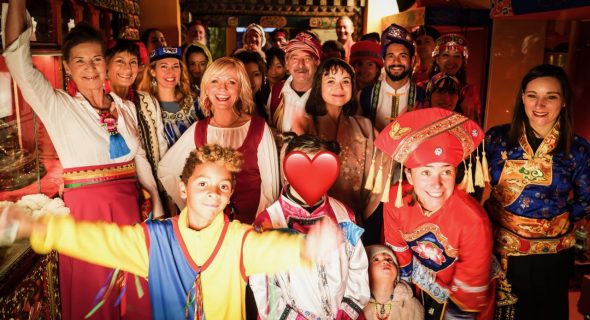 In one of the meetings the Merigar Gakyil has fairly regularly with the Mayor of Arcidosso, we talked about the day of December 8. For us practitioners it is a particularly significant date, but it is also an important day for the local community because the Immaculate Conception is celebrated in the religious calendar. From this reflection the idea arose of somehow uniting our two communities on a day in which they could meet.

Initially the most evident outwardly event should have been the change of the name of the street currently known as ‘Via Tibet’ in Arcidosso to ‘Via Namkhai Norbu’. However, it became clear that this would not be possible due to the time element because the bureaucratic procedures for the name change are long and complex.

However, another possibility was raised, namely that the Cardinal Archbishop of Siena could visit Amiata and also meet the Community at Merigar. This seemed like an excellent opportunity and we started working on a joint program. 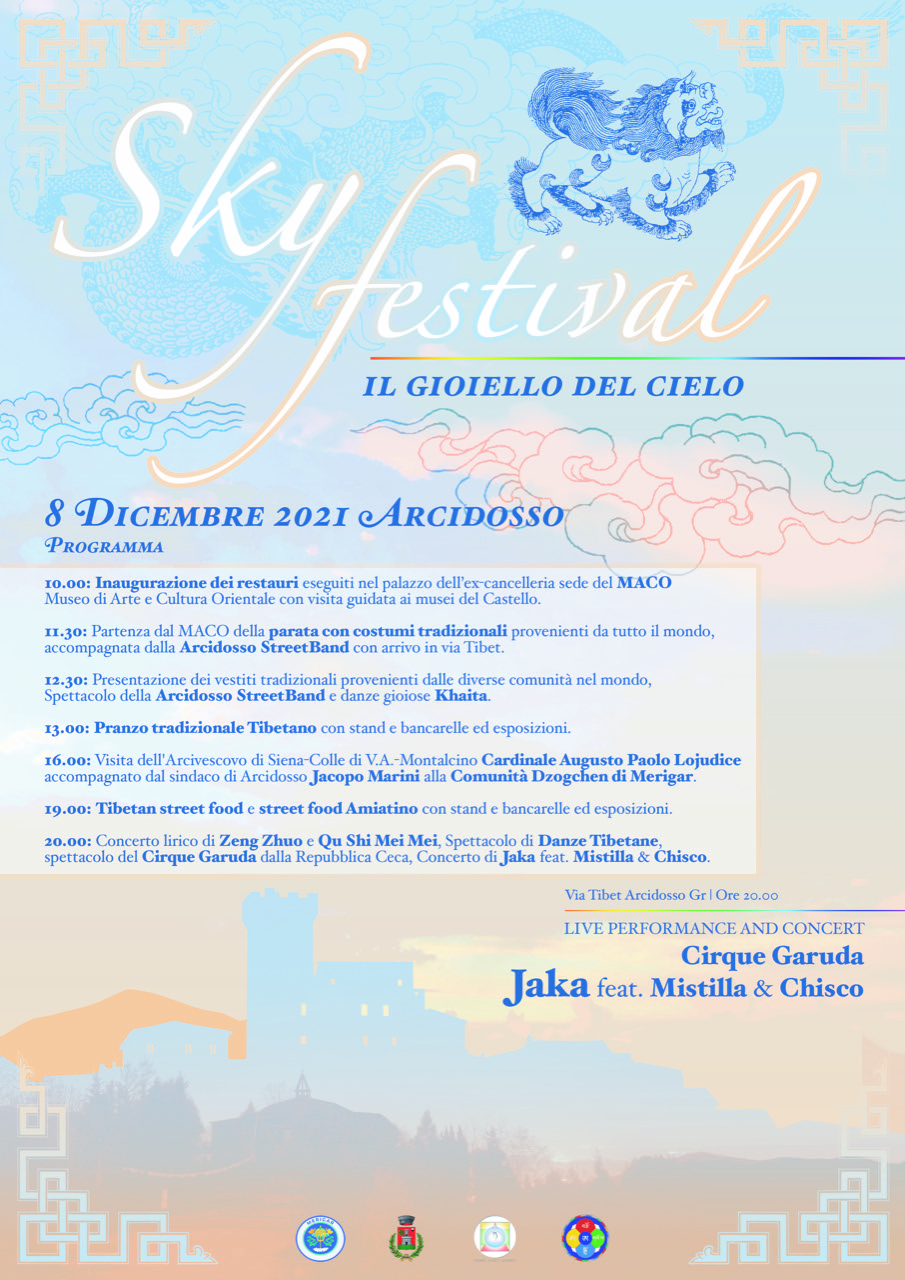 The Gakyil of Merigar and Dynamic Space of the Elements together with the Mayor of Arcidosso, the municipal administration and its assistants began to work on a program for the day. To the part that was to take place in Arcidosso we gave the name ‘Sky Festival, the Jewel of the Sky’, with a clear reference for us to the name of our Master. At Merigar, in addition to the Tara practice, one of our practitioners, Annamaria Moscatelli, proposed creating a more intimate event to remember Rinpoche. 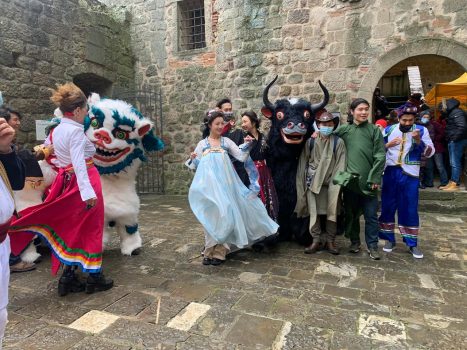 The organization of the events in Arcidosso was conducted with great skill and enthusiasm by Migmar and all the staff of Dynamic Space, while the part that took place at Merigar was organized by the Gakyil and the Merigar staff. However, on this occasion beyond the limits of names it was clear that some people are often part of both these entities, and in any case we work together, with the same purpose, collaborating. 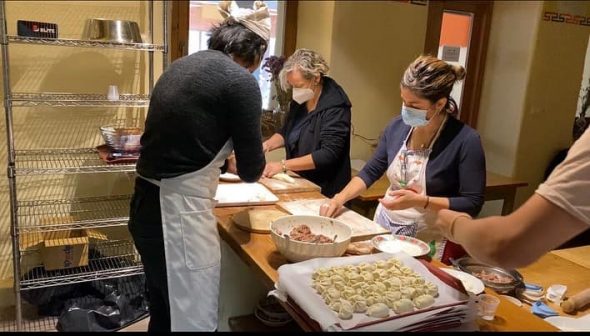 Several adjustments were needed to define the program, not always easy, but in the end we reached a balance. Several days earlier, groups of our practitioners set out to prepare thousands of momo, in fact more than 4,000 were produced, frozen and stored at Merigar to be cooked on the spot and taken to Arcidosso. Migmar invited and organized travel and accommodation for the artists who would give life to the concerts and evening shows.

Dozens of traditional costumes were sent to Merigar from our Communities around the world, and our practitioners, both local and specially arrived from abroad, wore them cheerfully at the costume parade. 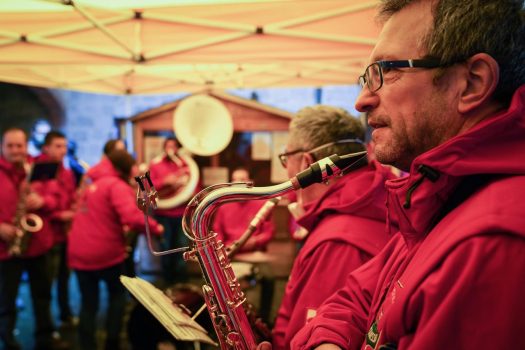 The Arcidosso Street Band gave one of their typical performances and made everyone present move to their rhythm. The MACO Museum was spruced up to accommodate the inauguration of the recently completed restoration work on the front facade. At the castle, in addition to the food stands, there were also tables from ASIA, the Dzam Shop and Dynamic Space.

At Merigar the two most complex events to organize were ‘A small tribute to our Master’ and the welcome for Cardinal Paolo Augusto Lojudice. 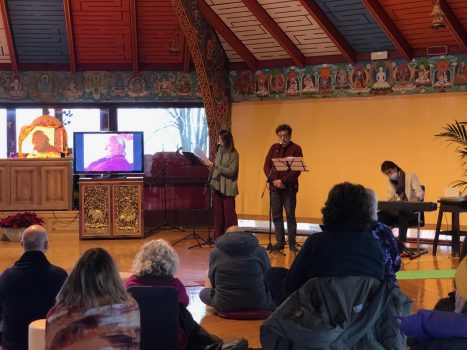 The homage to the Maestro required a great deal of research, choice of contributions, organization of the events and a complex technical platform. Annamaria worked together with Mirella and Anna in the preparations and also involved practitioners, professional actors and musicians who presented the event and recited the lyrics, accompanied by music.

Our technicians from Merigar, Cvetko, Mirella, Margherita and Danny coordinated with Sebastien at Dzamling Gar and with Alessandra Policreti to webcast the event, with the English translation.

The emotions among those present was palpable, but it also passed to those who followed online and we received many messages as witness to this.

In the afternoon Nina Robinson led a short practice of Tara, which would be followed by another led by Adriano Clemente from Dzamling Gar. In the meantime, the Gönpa was prepared for the arrival of the Cardinal, his companion who deals in particular with interreligious relations, and the current Mayor with his parents. 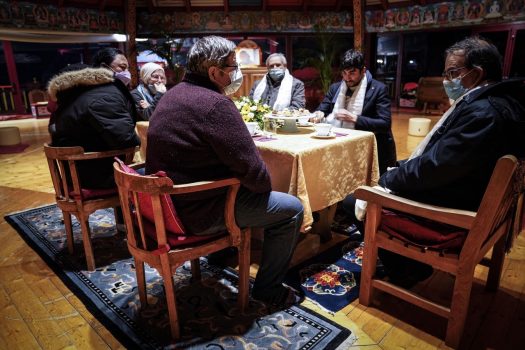 A table was set, decorated with flowers and placed in the center of the Gönpa, where His Eminence and his assistant, Rosa Namkhai, the Mayor of Arcidosso, the Vice President of Merigar, Fabio Risolo, and Migmar took their places. Fabio showed the visitors the Gönpa, explaining the meaning of its function, its origin and the paintings found there. A simple and informal conversation took place at the table. As the Mayor had advised us, the Cardinal proved to be a simple person, easy-going, open and interested in our Community and our Master.

At the end of the short visit, during which tea and sweets were served to the guests and also to the numerous practitioners present at the visit, Merigar offered His Eminence a beautiful tangkha of White Tara, and the illustrated book describing our Gönpa as a gift. The gifts were greatly appreciated. Some of our practitioners then attended Mass celebrated by the Cardinal in the beautiful Incoronata church, just outside Arcidosso. 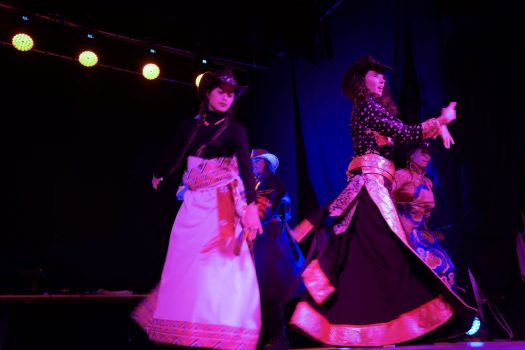 In the evening, dinner and the show began, respectively at the Castle and the Teatro degli Unanimi in Arcidosso. Up to this point, we did not mention that the program in Arcidosso, which had been planned to take place almost entirely outdoors had to be carried out mainly inside. Previous to the event each day we checked the weather forecast, which predicted rain for Wednesday 8, hoping for a change. Although the days up to Wednesday were splendid sunny days, with starry nights that seemed to contradict the forecasts, in the end we decided not to risk it and we moved everything to the Castle and Theatre, kindly made available by the Municipality. The rain arrived punctually on Wednesday morning and lasted incessantly throughout the day. 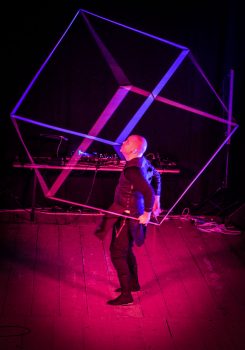 It was obviously not the same in terms of participation, but we adapted to the circumstances. Everything went very well, people were happy, joyful and there was some of the atmosphere of past years, despite the restrictions due to the pandemic and the unfavorable weather conditions!

The show at the theater was very enjoyable, excellent, in particular the performance of the Khaita dancers was truly remarkable as well as that of Medved with his juggling skills, the music of Jaka, the singers Zeng Zhuo and Qu Shi Mei Mei and the Tibetan artist Gonpo Tsering. Congratulations to everyone! 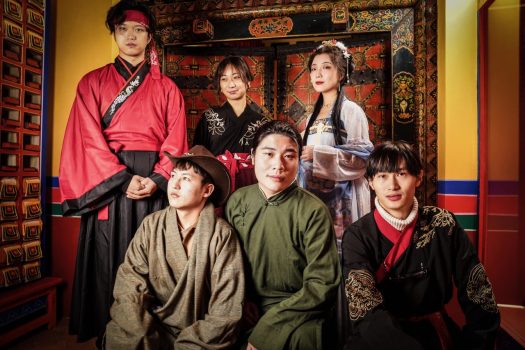 The experience of this day and of all its elaborate preparation and realization has shown us how our potential can be best expressed if we abandon personal visions and move in the same direction, for a purpose that goes beyond individual egos. Next year we will prepare on time and with this lesson in mind.

Homage to our Master, who is always present with us, even if we sometimes forget.

Acknowledgments:
The Mayor of Arcidosso Jacopo Marini
Cardinal Augusto Paolo Lojudice who visited Merigar
The Gar and the Lings of all the world who sent us beautiful and colorful costumes.
Cirque Garuda, Jaka, Khaita Joyful Dances, Zeng Zhuo, Qu Shi Mei Mei, Gompo Tsering, with amazing performances that gave all of us heartwarming emotions.
Team momo with Tenzin Kunga, Salima Celeri, Viola Maglietti, Veronica, Gabriele, Constance, Anna, Francesco, Maria, Tomy and Davide who managed to cook 4000 meat momo and 1000 veggie momo for us to enjoy a super delicious lunch and dinner!
Thanks to MACO museum and Alex Siedlecki who helped us with all the organization.
Petra who managed to keep our powerful Snowlion and majestic Yak calm in front of the people
And of course thanks to our wonderful photographer and video maker Michele Salvatore!

Thank you again for this beautiful day. Thanks to the whole Community around the globe that once again showed how united and strong we are.