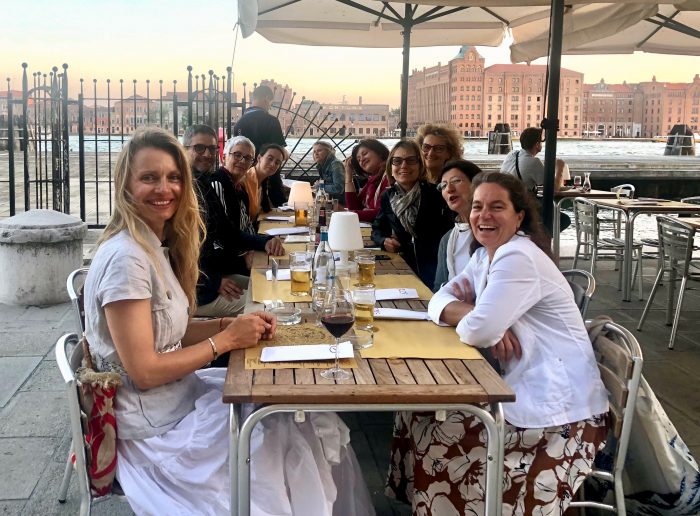 The beautiful annual Yantra Yoga course in Venice, which began on October 6, 2021, and ended on May 25, concluded with pizza among friends. Fifteen participants, residents in the beautiful lagoon, both beginners and intermediates, and a few advanced students took part.

Lessons were held every Wednesday from 17.30 to 19.30 in a large gym, alternating between second level instructor Marco Baseggio and the first level instructor Chiara Carraro. The program has been repeated every year since the distant winter of 2007/2008 and has become a special and unmissable event for those who wish to approach or progress in learning this form of yoga that was transmitted to the instructors by the Tibetan master Chögyal Namkhai Norbu.

“During the practice sessions we will work with specific tools: our body, our breath and, finally, our mind which is the most difficult aspect to master,” Marco explained in the opening lesson. “By working with the body and the breath we will not only be able to feel better but also to better observe both within – ourselves – and without – what surrounds us”. The aim of this series of lessons is to “rebalance our condition, learn to breathe and discover the condition of presence”. This is only the first step for further ‘discoveries’. Through Yantra Yoga we can, in fact, truly “enter knowledge”, although this was not the purpose of this specific course. 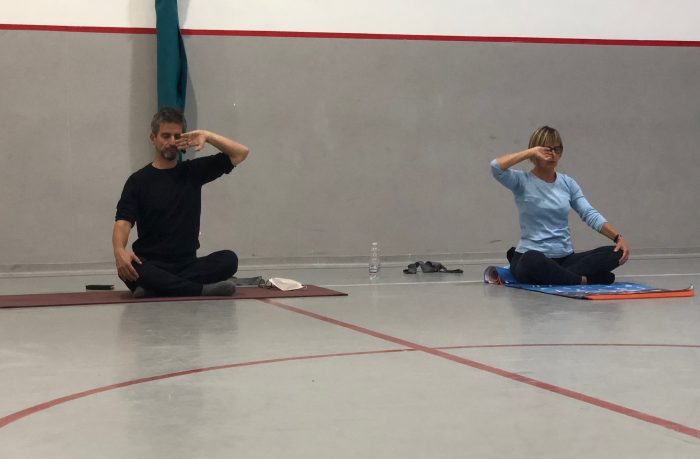 “We will begin with a series of warmups”, Marco continued, “which were transmitted to us by Fabio Andrico and Laura Evangelisti, the main instructors of the Dzogchen Community, designated as such by Master Chögyal Namkhai Norbu”. Fabio Andrico has personally developed a technique to help practitioners to know and master their own breath, which he has called ‘Breathe’.

“During our journey”, Chiara added, “we will learn to practice some pranayamas”. But “first of all we will practice the nine breathings”.

The first lesson began like this: the nine breathings were followed by warmup exercises and preliminary movements of Yantra Yoga that are not found in other types of yoga.

The group was compact, collaborative and constant in attendance. As one of the participants, Michela, said: “Loosen the body, open the mind, free the breath. The keyword is harmony. Chiara and Marco really managed to create a united group that worked in synergy”.

Another annual cycle of lessons will start in October. After the presentation of the activities of Gyamtsholing, the Dzogchen Community of Venice, on September 24, registrations will be open again for all those who wish to enter or continue on the path of practicing yoga.