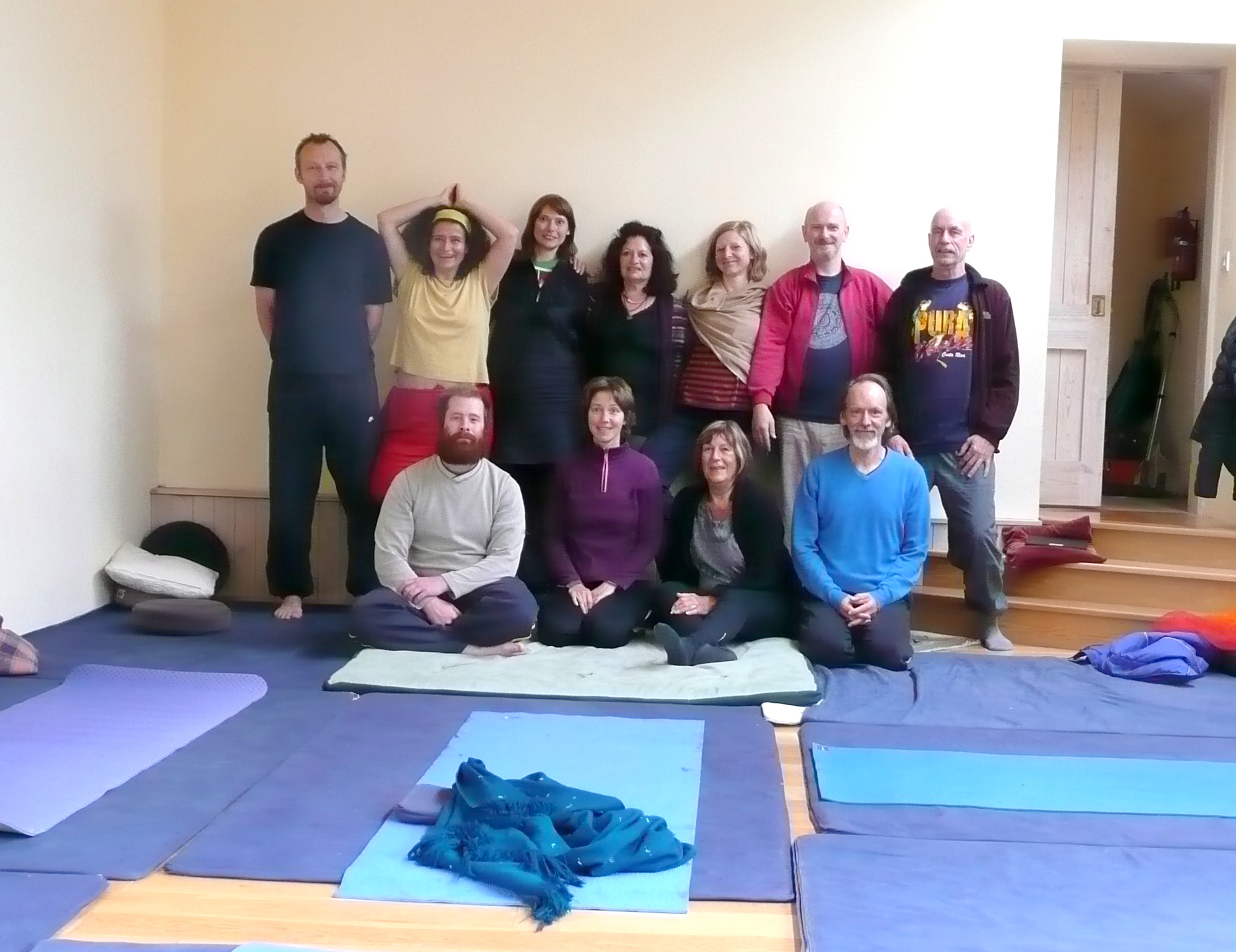 Eighteen people participated in this very successful course called A Course of Yantra Yoga with Pranayamas and a Constitutional Approach. The aim of this course was to identify the individuals’ unique capacity i.e. strengths and limitations of the students and how they can be supported to develop and progress with Yantra Yoga and yoga in general.

It has become increasingly clear from teaching Yantra Yoga that many students in the beginning of their practice would benefit from identifying and trying to help balance their condition, and in yoga initially this means using a more therapeutic focus on their physical body and the pranic balance related to breathing, energy and emotions. This may include a wide range of issues like old injuries, tight stiff muscles, weak deficient muscles, imbalances and blockages in the channels and prana, etc. We all come to the mat with our unique mix of elements with their corresponding body, speech and mind characteristics.

Rinpoche frequently explains that we should make appropriate adjustment or modify our practices according to our 5 elements and 3 humors. Within the Yantra Yoga system there is this knowledge based on Tibetan medicine and Buddhism but it may not be so easy to understand or apply.

During the course I shared from my experience of practicing Chinese Medicine, my understanding of the different oriental healing systems, western medicine and neuroscience on how yoga and pranayama can influence our body, mind and energy. The course led to a full practice of Yantra Yoga, but other forms of yoga were used as a way of supporting the development of the postures and individual needs of the students.

When we practiced Yantra it was precise and clear, and when we practiced and learned from other systems it was also clear regarding the similarities and differences in principles and effects. The course was open to anyone who has some basic experience in Yantra Yoga and associated meditation and contemplation.

Yoga Pranayama from a Constitutional and Medical Approach

The May bank holiday weekend with the torrential rain that invariably accompanies it, brought together an auspicious gathering of yogins to Kunselling The course was so over-subscribed that twice as many people had signed up as could be accommodated.

Yantra yoga is an ancient Tibetan system usually practised by advanced yogins in a lengthy closed retreat. It is a complete path in itself to open the chakras through a combination of movement, breathing and bhandas or locks, so that ultimately the prana enters the central channel. Only then can real meditation progress. Usually these esoteric yogic techniques are kept secret as they are related to the vajrayana path of transformation requiring a basis of practice and initiation, there are also dangers if it is practised without adequate training or supervision. However, in response to the need of lay practitioners, Choegyal Namkhai Norbu opened up the system in the seventies.

As all those attending the retreat had some experience of yantra yoga and John Renshaw is an exceptionally qualified teacher, the group experienced a high level of exhiliration and energy release. Each day there were 6 hours of yoga from different traditions and yantra yoga practise starting with lengthy warm-ups, stretching and twisting followed by the yantras which develop the holds, locks, breathing, and releasing in rhythmic movement, Towards the end of the retreat the emphasis was on longer sessions of pranayama,s  and rhythmic breathing. John repeatedly pointed to the Dzogchen view state of Guru yoga, contemplation or non-meditation as the final stage of the practise of yantra. And indeed there were times when the relaxed jaw and posture of the release was so comic we had to laugh spontaneously, and thus released even more.

John’s remarkable knowledge of anatomy and physiology, and oriental medicine was packed into an daily hour session  with photo projections of muscles ,nervous system, the brain, and the glands with reference to the sympathetic and parasympathetic nervous systems and prana which govern and respond to  both life and practice.

The master chef Darius in the new kitchen extension prepared each meal with care and love, with the help of Mary Finnigan. The 5 children – all girls – staged two never before seen plays and gave away tickets marked £50. On the final evening after the gana puja, they played to a sold out audience at double the price.

The only thing that didn’t change was the weather. Except for one sunny patch, it rained every day, and not even our inner brightness could change it.

By Naomi Levine author of The Miraculous 16th Karmapa